Toyota, How One Man's Dream Became a World Icon

You don't need to be a motoring enthusiast to know that Toyota is the manufacturer of some of the best designed, highest quality, finest produced motor vehicles under the sun!

The Art of Japanese Manufacturing 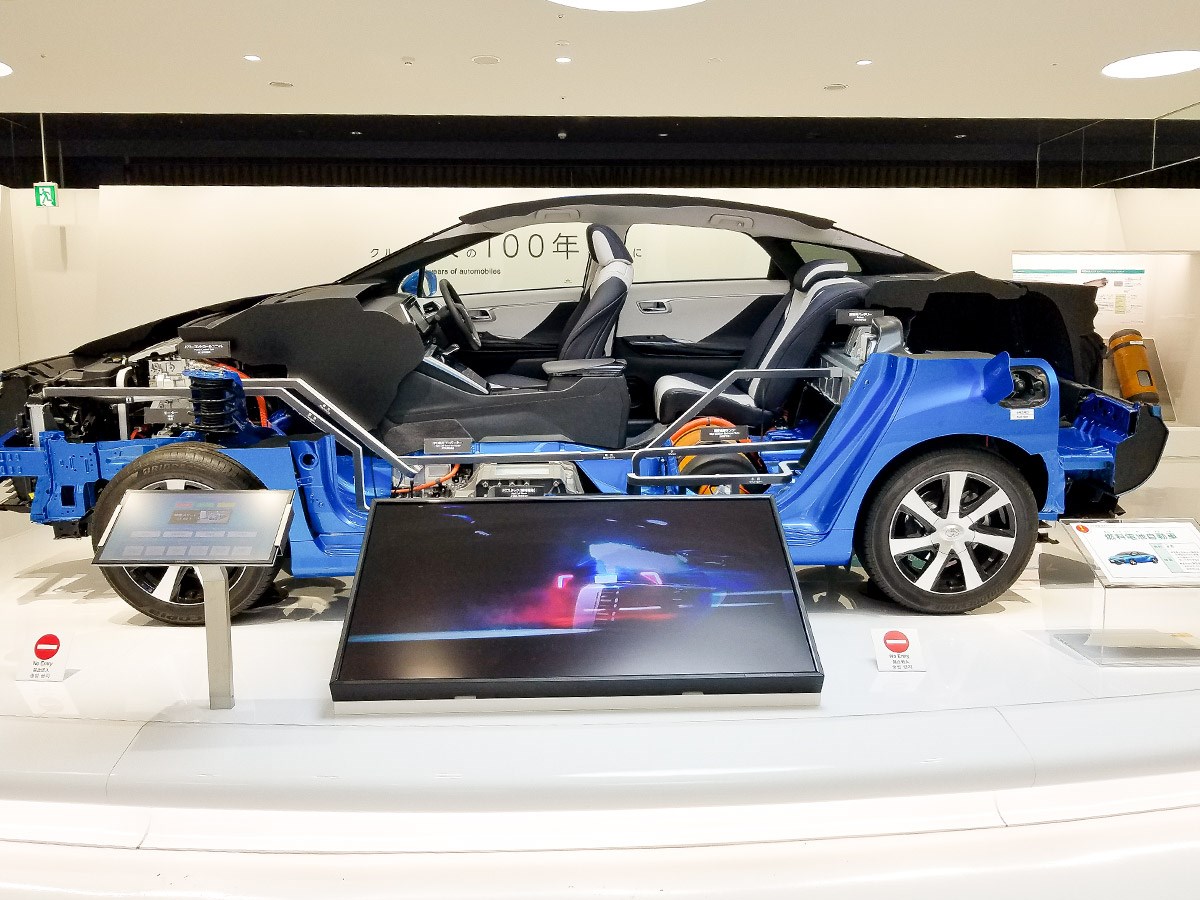 Toyota! The name is famous the world over. Wherever you go throughout the four corners of the Earth, you're bound to see the Toyota name and logo. It's a name synonymous with quality, we all know that, but what is relatively unknown is that the Japanese behemoth known as Toyota is based not in Tokyo, but about 360km south in Toyota City, Aichi Prefecture, that the company has its roots in a small castle town and that it all began as a manufacturer of automatic looms for cloth production. 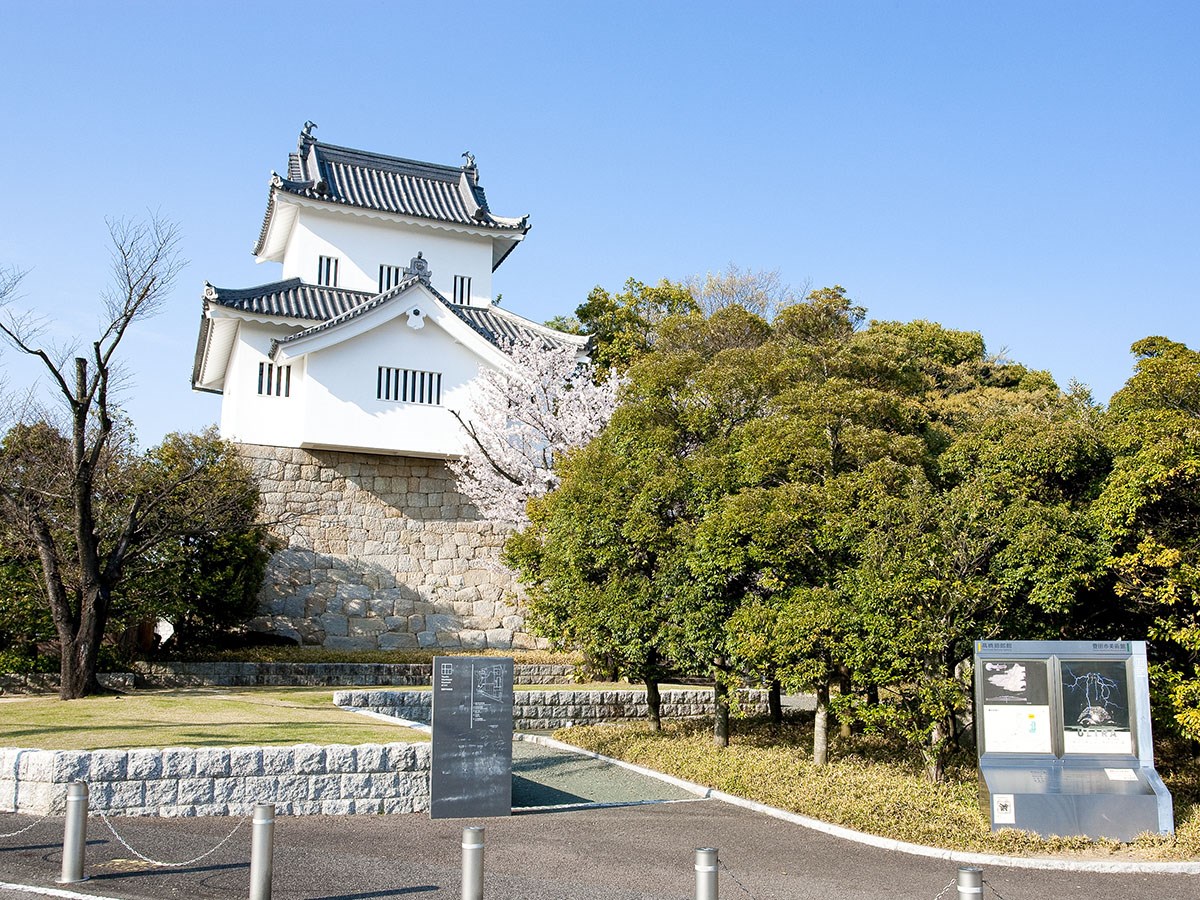 Until 1959, Toyota City didn't exist. Before taking the name of the regions' biggest employer, the old township was called Koromo, and was ruled over by the Miyake and Naito clans from the sturdy namesake, Koromo Castle, also known as Shichi-shu Jo, or Seven-State Castle as it overlooked seven surrounding provinces. The Toyota Municipal Museum of Art now occupies much of the castle site, but you can see a reconstructed yagura watchtower amongst the various baileys. 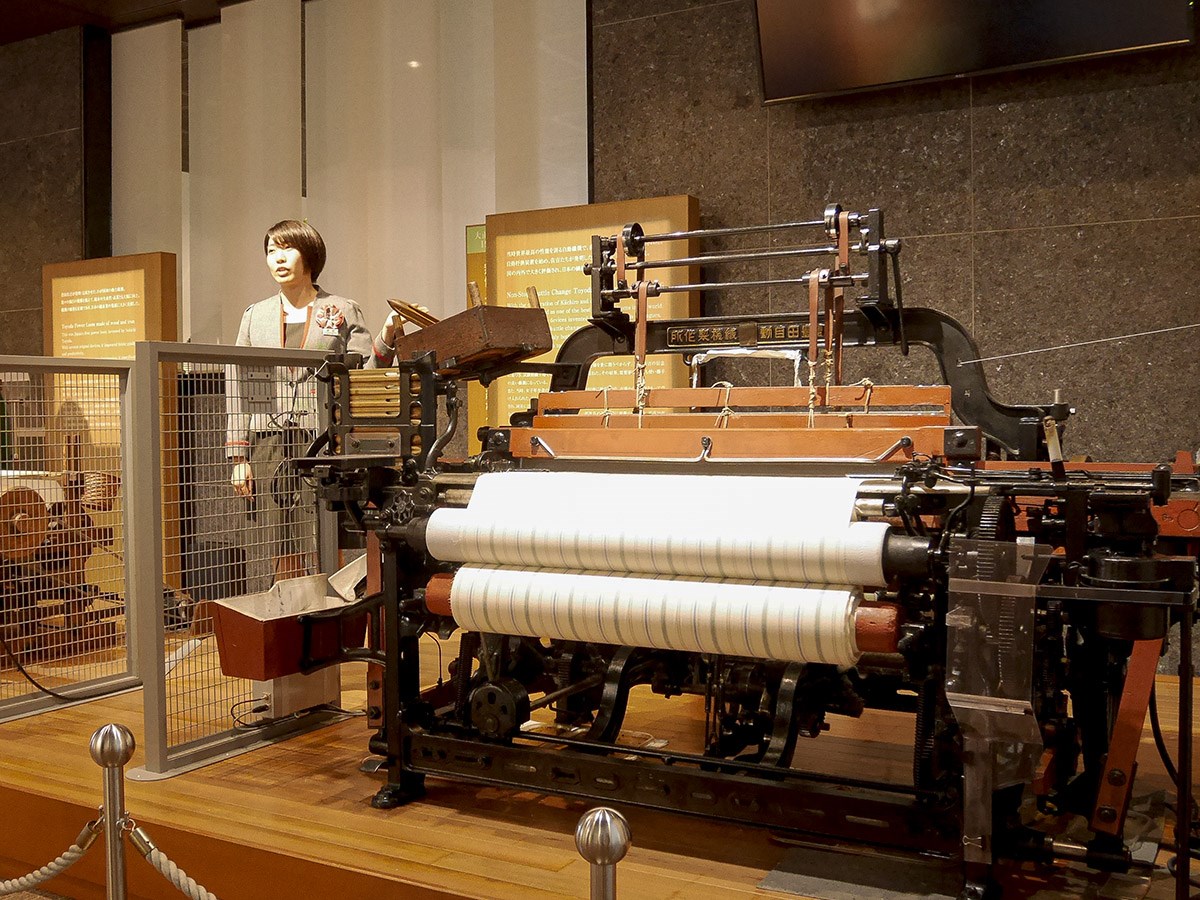 The Toyota story began in 1924, when businessman and innovator Sakichi Toyoda invented a high quality and fast working automatic cloth weaving loom that would stop when a fault or thread breakage occurred. The patent for this innovative loom was later sold to a British company in 1929, and the sale of the patent generated the capital funds necessary for the Toyoda family, in particular Sakichi's son, Kiichiro Toyoda, to enter the motor vehicle manufacturing industry. 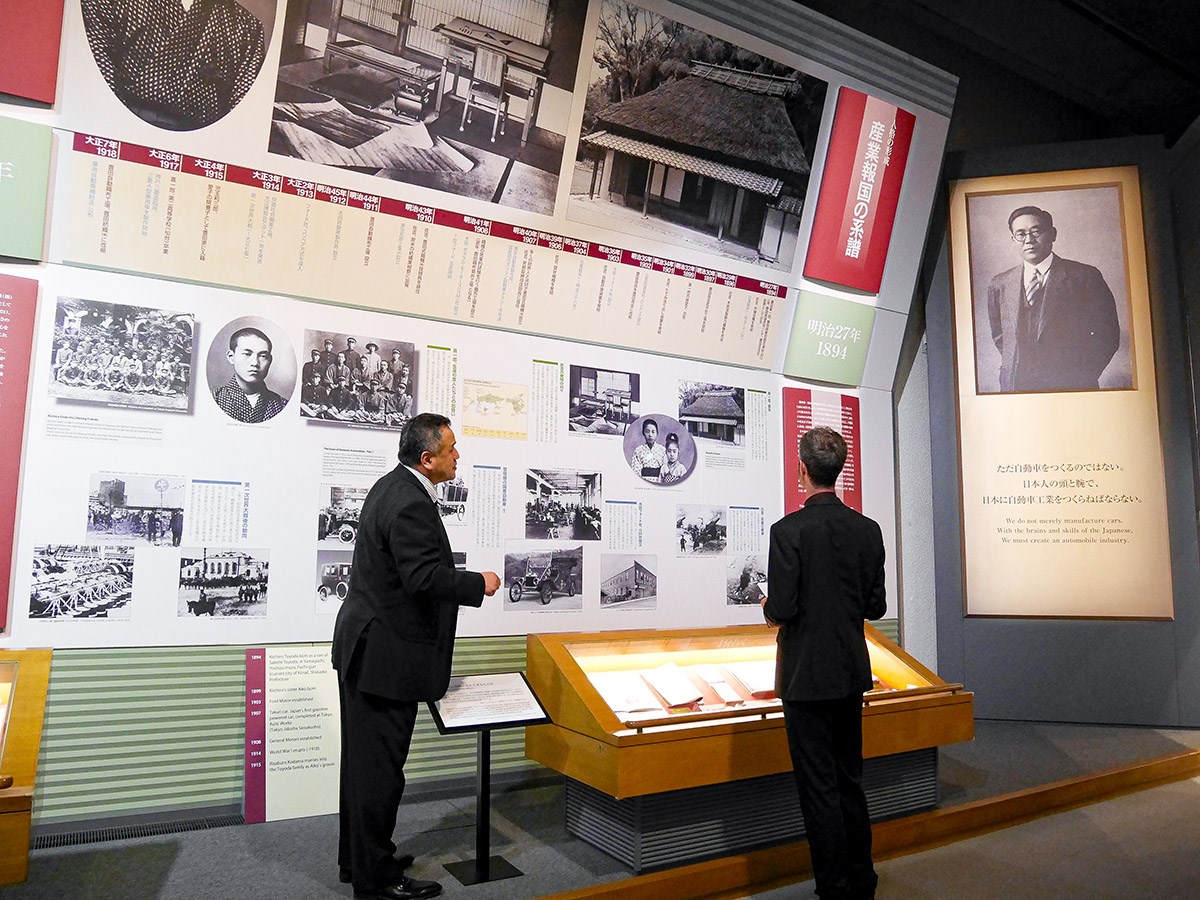 Kiichiro Toyoda had inherited his father's penchant for the development and improvement of machinery. He had visited the United States and Europe in 1929 and had been duly impressed with the way cars had positively impacted on society there, and envisioned a Japan along similar lines. He also saw the inefficiencies of foreign production lines and was determined that he could improve on this. Returning to Japan, he immersed himself in the research and production of gasoline powered engines, finding the casting of the cylinder block in particular to be a major hurdle he eventually overcame. During this time, he persuaded his elder brother, then the head of the family business, to establish an automobile production division as part of the Toyoda Loom Works company. It was considered a huge risk for the family business, however, the project went ahead and the Toyoda company commenced producing cars in 1933. 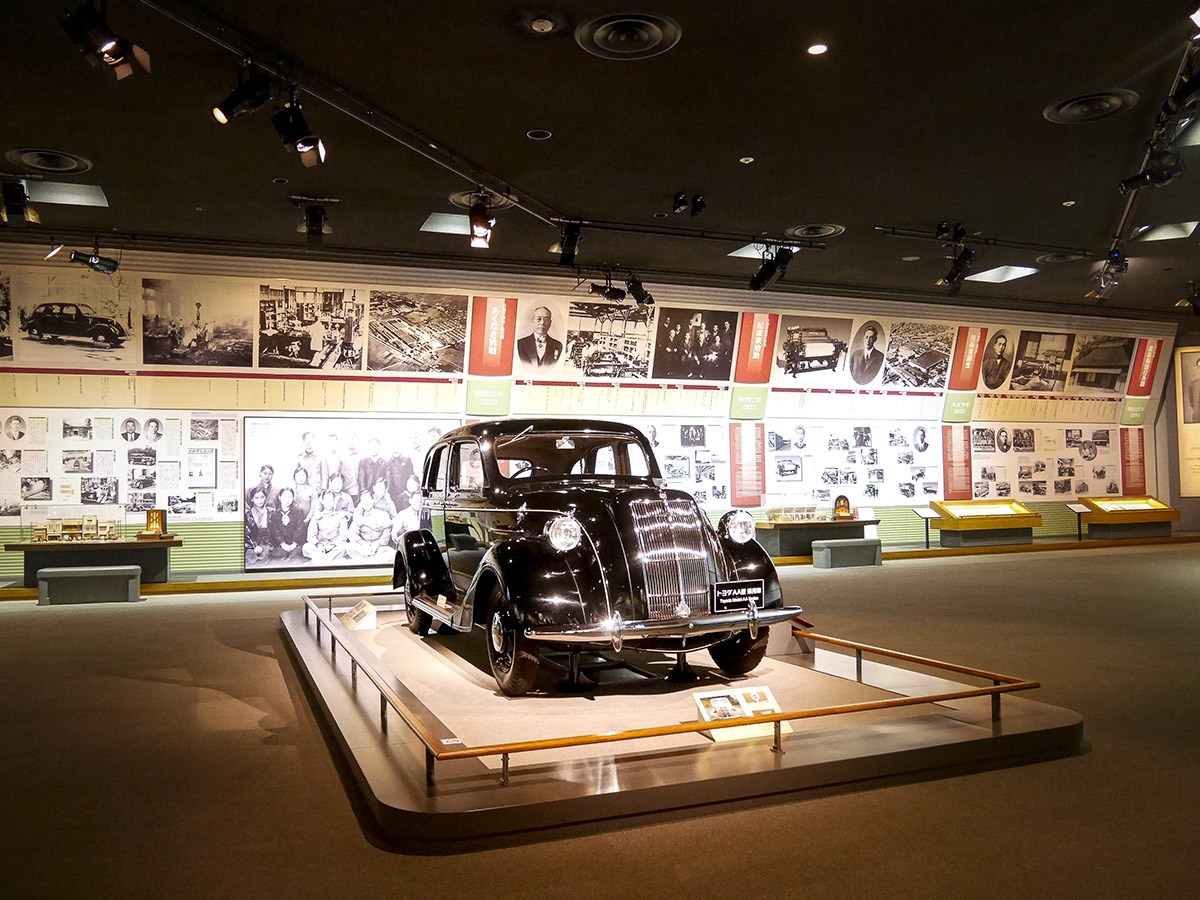 By 1934, Kiichiro had produced the Type A Engine, which he fitted to the first Model A1 passenger car, followed by the G1 truck in 1935. A year later saw the Model AA passenger vehicle enter full production. 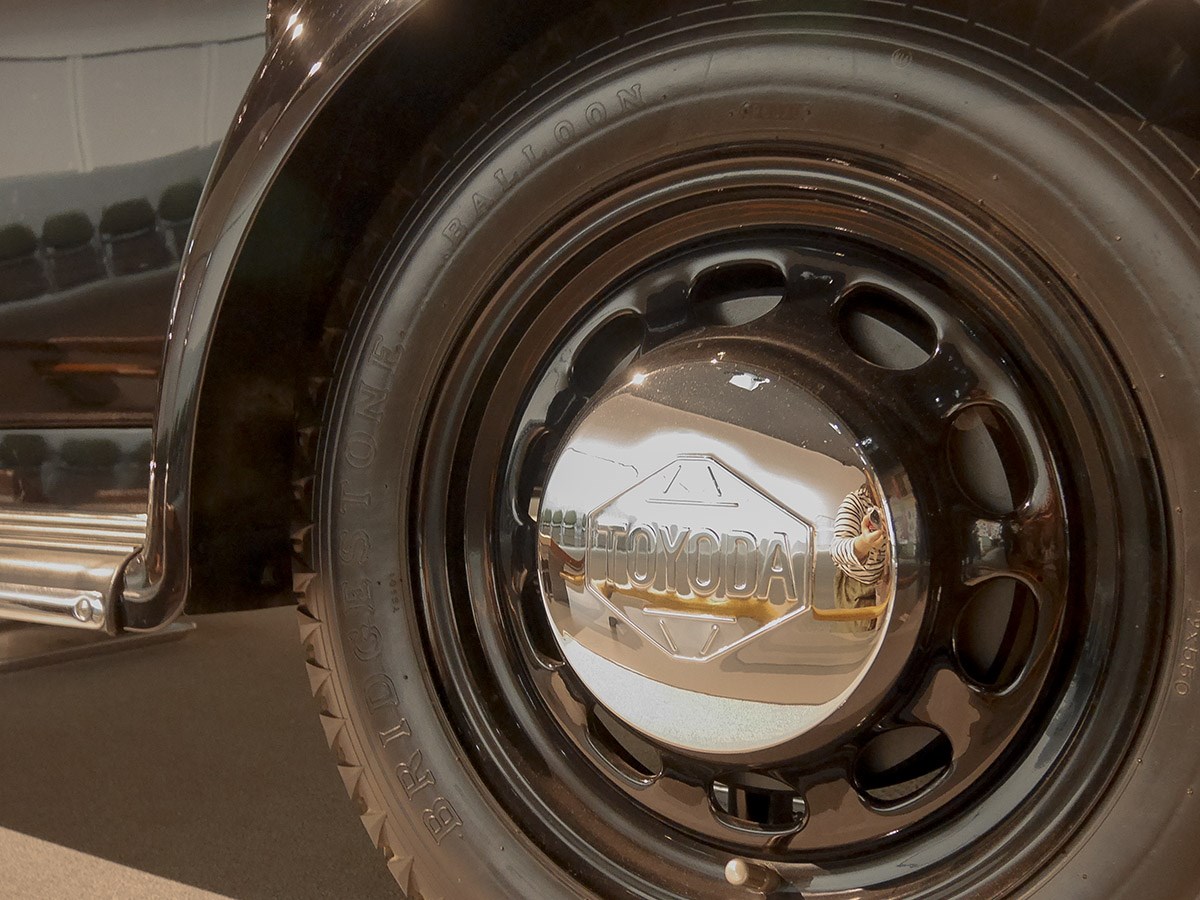 While the family name was Toyoda, the company became Toyota, as it was deemed the sound of a "T" rather than the "D" at the end was clearer, also the number of strokes used to write the name in Japanese was reduced from ten to eight, long considered an auspicious number, and simply to differentiate the family from the company it fronted.

As the clouds of war developed in the late 1930's, the Toyota company was called upon to produce trucks for the Imperial Japanese army, and in the lean years following World War II, suffered severe economic hardships along with the rest of Japan. Commercial vehicle production recommenced in 1947, but two years later, the company found itself on the verge of bankruptcy. Layoffs and wage restructuring led to strikes which further crippled the plant in 1950, and were resolved with the unions agreeing to the cut backs, but only on the condition that the company president -- the man who had struggled to form and develop Japan's motor industry, Kiichiro Toyoda, tend his resignation.

The company was at crisis point when American military demand for trucks at the time of the Korean War helped the company turn its finances around. Although forced to resign, Kichiro was set to be reinstated a year later by the company's board of directors, but unfortunately he would never see his return, nor the result of his hard work. Kiichiro Toyoda died of a cerebral hemorrhage in March of 1952 aged just 57. 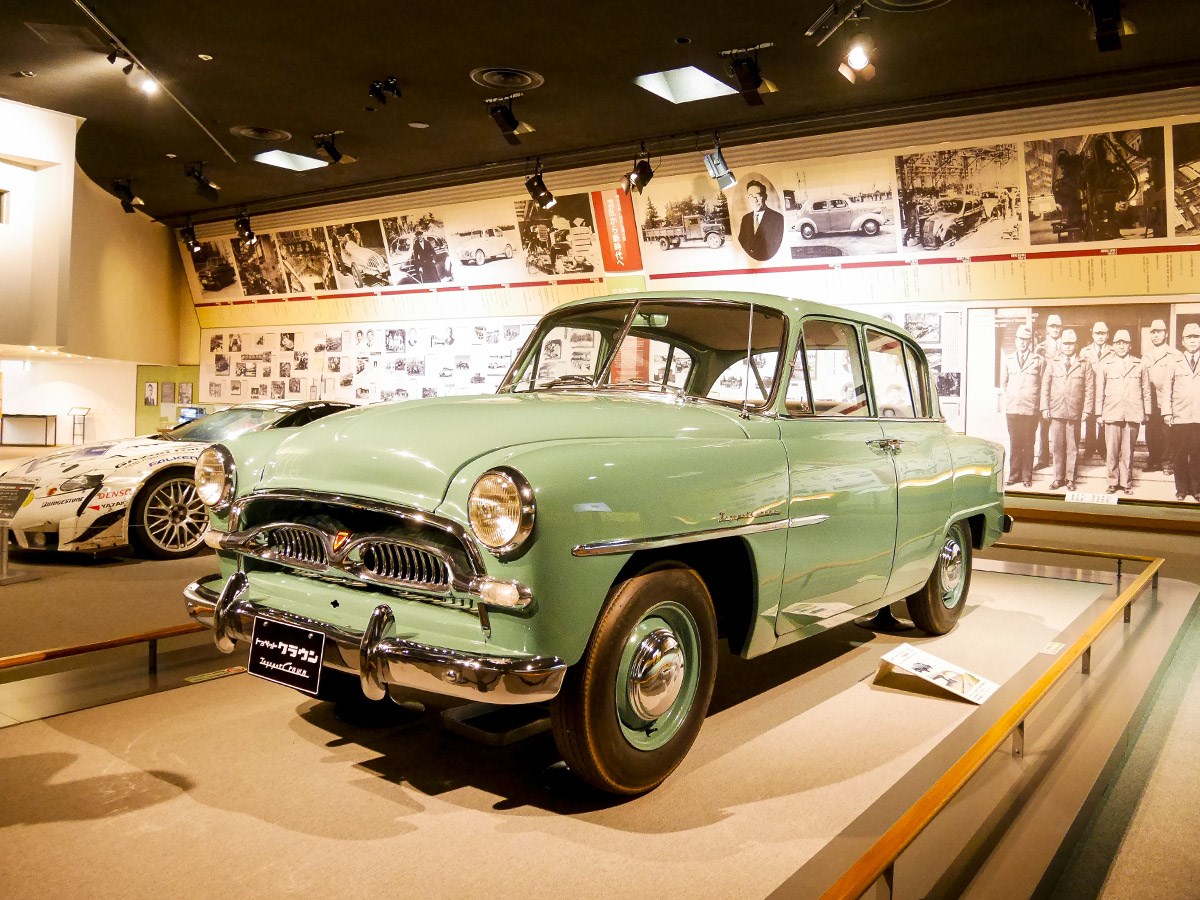 Five years after his passing, the Toyota Crown was introduced to the American market in 1957. As per Kiichiro's dreams, the company entered the European market in the 60's, and expanded with the release of the Toyota Carolla in 1966, culminating in the establishment of a network of dealerships across the globe. By the 70's Toyota was a well-established name the world over, and through the 80's was a brand to be reckoned with.

By this stage, Toyota had produced some 30 million units, however, it wasn't just the cars the world was watching, but the way Toyota made vehicles too, with its innovative designs, features and manufacturing practices that improved production, quality, speed and accuracy. It was the envy of not just the automotive industry, but all forms of manufacturing, many of whom adopted Toyota's various policies, such as the "Just-In-Time", and the Kaizen systems, whereby continuous improvements are made to not just the manufacturing processes, but to the entire company. 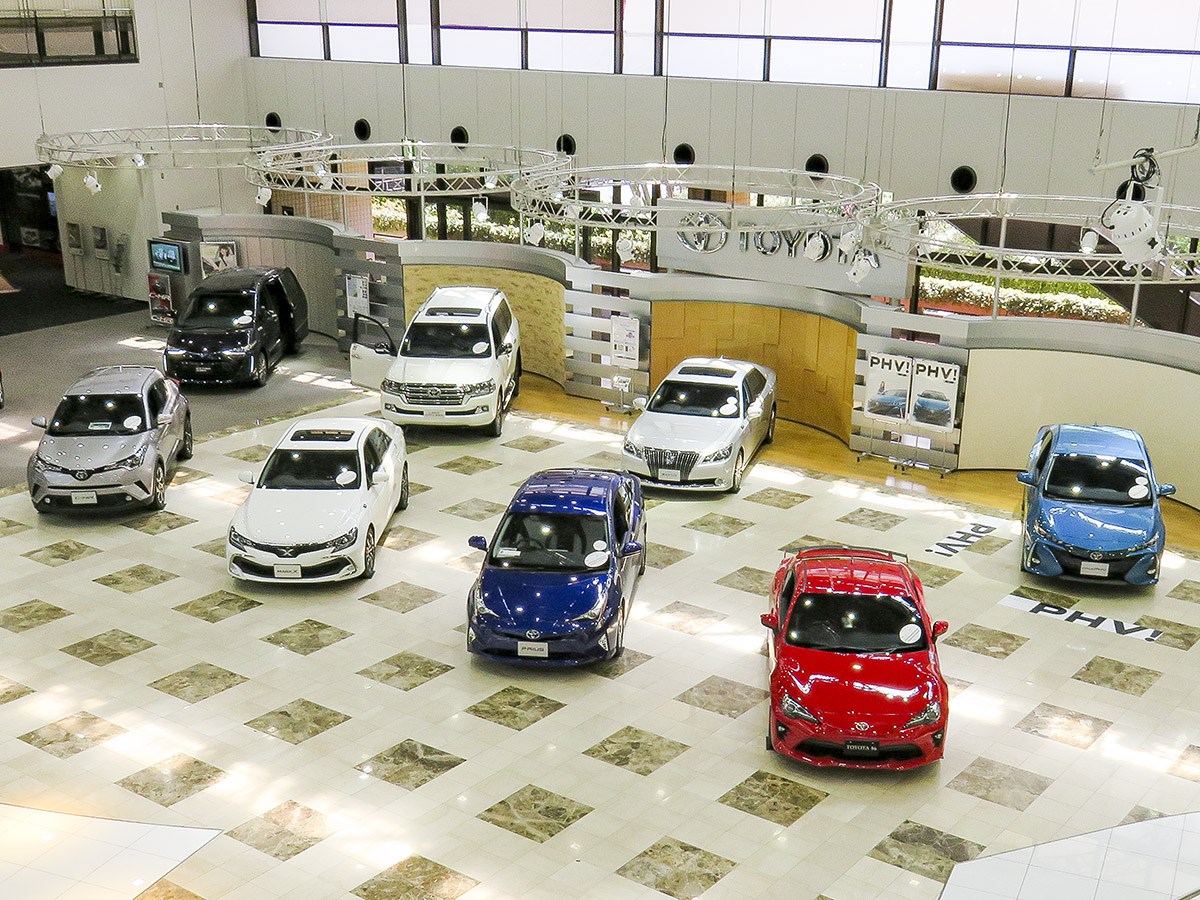 By the late 1990's, Toyota had produced over 100 million vehicles in Japan. It had successfully launched its impressive luxury brand, Lexus, and become the first to release a hybrid gasoline electric car, the Prius. The rest is history.

For having conceived and built this automotive empire, Kiichiro Toyoda is rightly held in the highest esteem to this day. One of the best places to see just how revered he is, requires a recommended visit the Toyota Kuragaike Commemorative Hall. 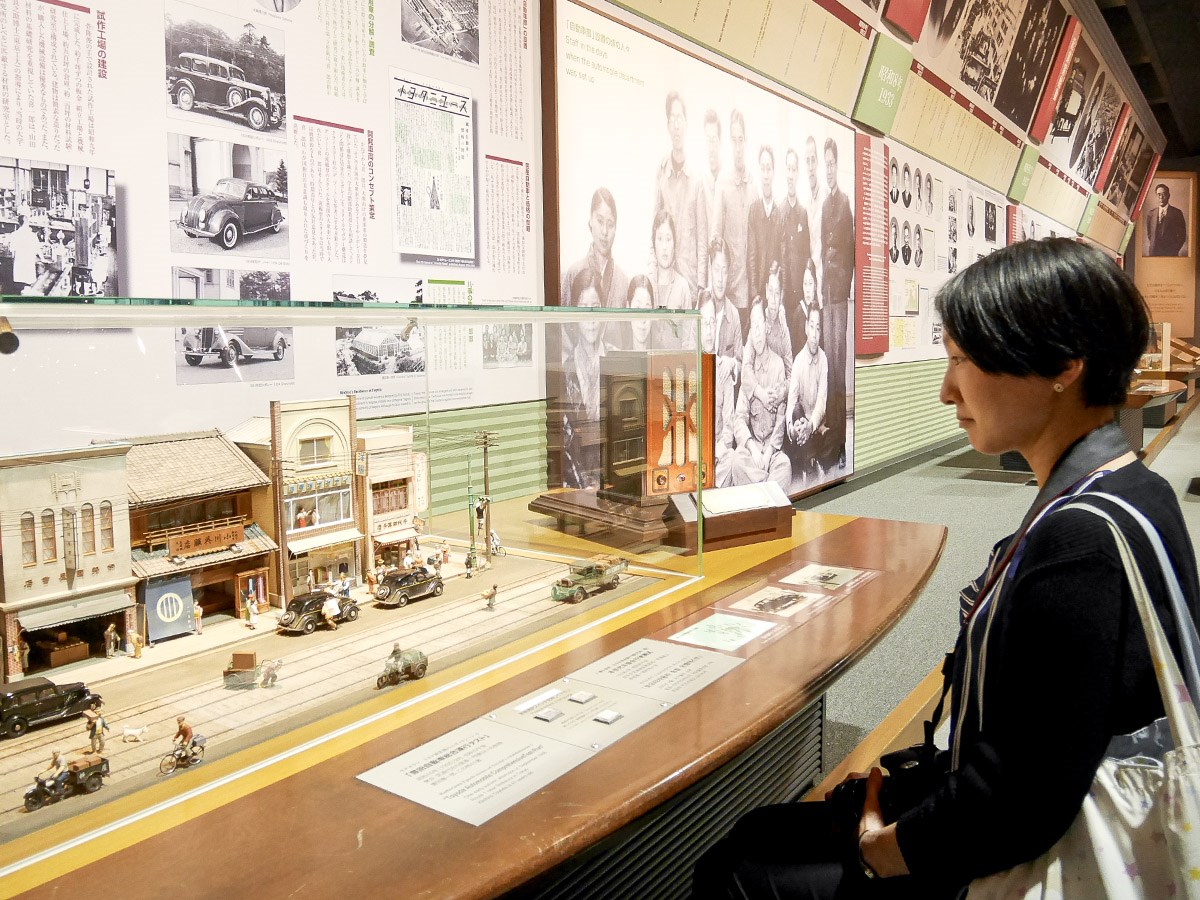 Back in the samurai days, a provincial lord is said to have thrown his horse saddle, or kura, into a large local lake, in the belief that the saddle would become the guardian deity of the waters. That lake became known as Kuragaike, or Saddle Lake, and in 1974, the surrounding wide, green park became the site of the Toyota Kuragaike Commemorative Hall, established to celebrate Toyota's 10 millionth vehicle. The hall now contains the Toyota Establishment Exhibit Room, a pavilion dedicated to the memory of founder Kiichiro Toyoda. The exhibit explains the companies' origins as a loom manufacturer, and takes the visitor on an audio-visual journey through the various trials and tribulations undertaken by Kiichiro in his quest to establish the automobile division, his attempts at developing early engines and designing production techniques to build better cars. A special video presentation outlines the Kiichiro Toyoda story in an informative and easy to understand manner, while the revealing "Radiorama" is an interesting concept.

Along a section of wall, old styled wirelesses are set up beside scale dioramas displaying various scenes showing Kiichiro Toyoda and his team overcoming production and technical problems. While visitors enjoy the scenes in miniature, they can also hear the fascinating story as narrated from the accompanying contemporary radio set. 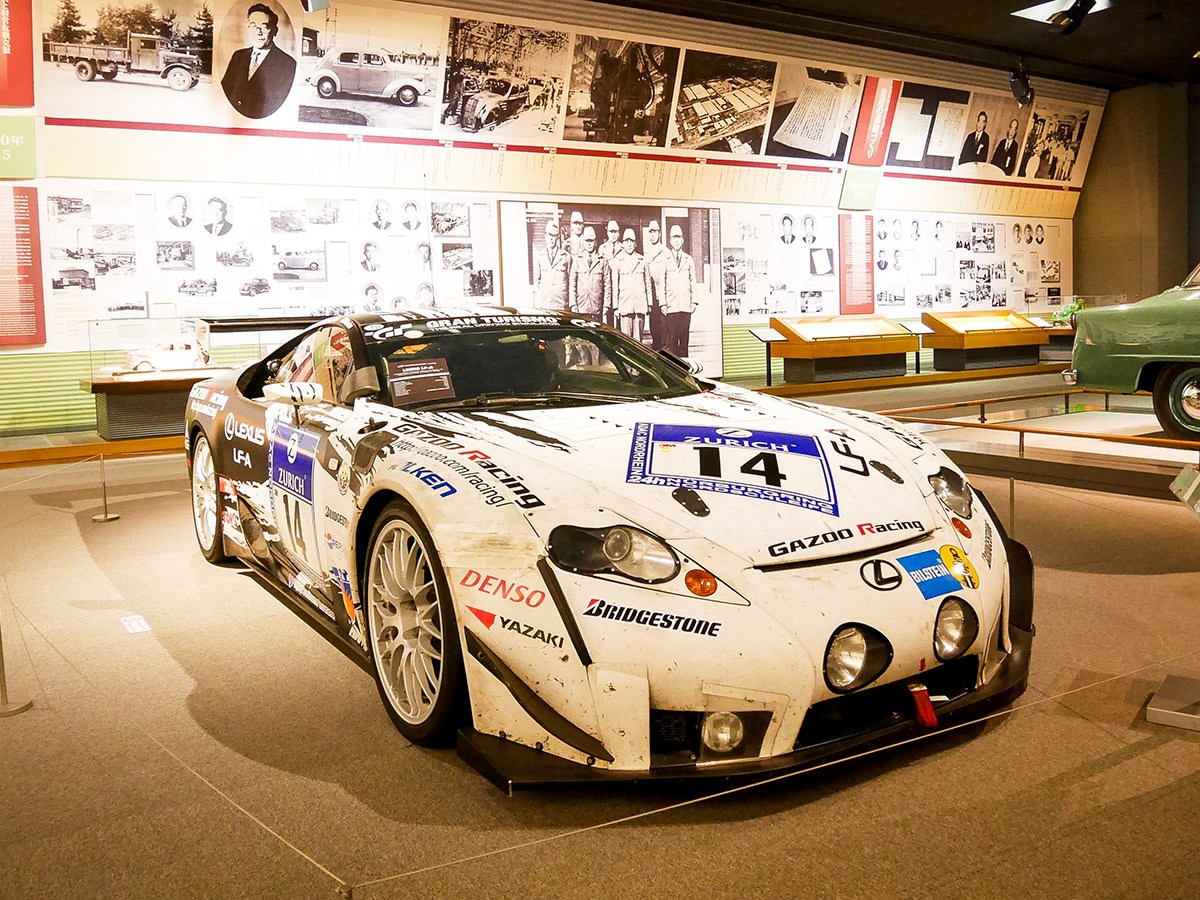 Besides the various historical exhibits, a number of production cars and Toyota race team vehicles are on display within the hall, including an early Model AA surrounded by numerous scale models of other early Toyota produced cars. The rear section contains a photo gallery covering Kiichiro Toyoda's life, from his humble beginnings in a reed-thatch roofed house, to Toyota's early successes.

Adjoining this main pavilion is the Kuragaike Art Salon, displaying fine artworks purchased and owned by Toyota for decorating board, conference and reception rooms and offices. The extensive collection is rotated about four or five times a year, with 20 to 30 specially selected pieces put on display for all to enjoy. 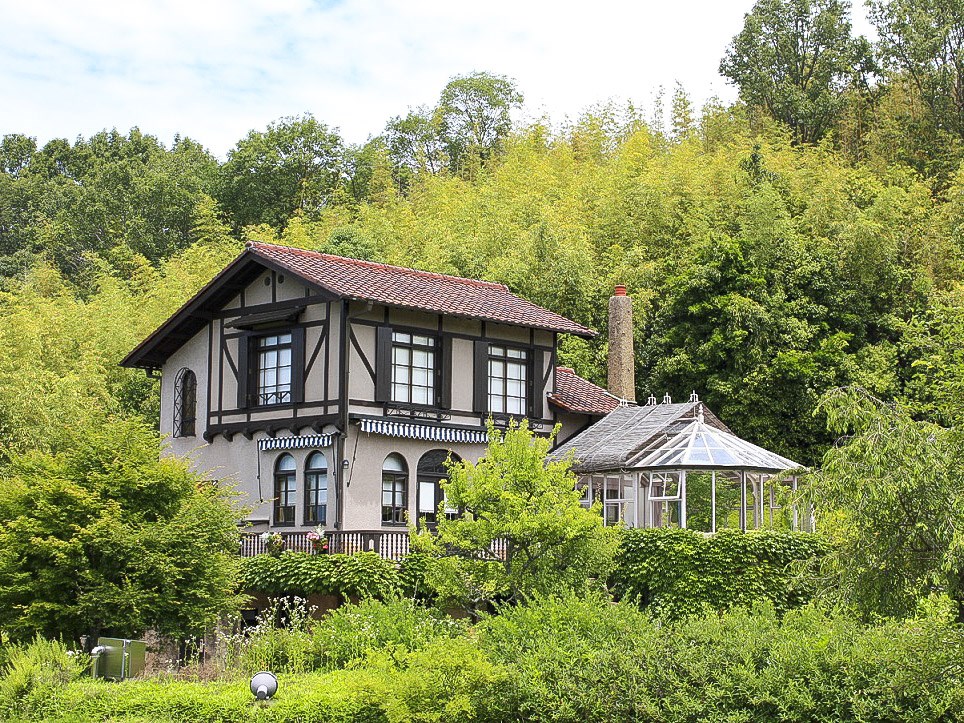 Just a short distance from the main pavilion and surrounded by the lush greenery of the Kuragaike Park is Kiichiro Toyoda's former residence. The old home, complete with furnishings, was painstakingly relocated here for preservation. Originally built in 1933 in Nagoya City's Yagoto area, the three-story home was designed by one of the leading architects of the time, and features both Japanese and Western styled rooms and a large connected greenhouse. To commemorate Toyota's 75th anniversary, a special garage was built nearby, and houses an anniversary model "Origin" car, with early-model styled double doors.

Toyota Tours and Other Attractions 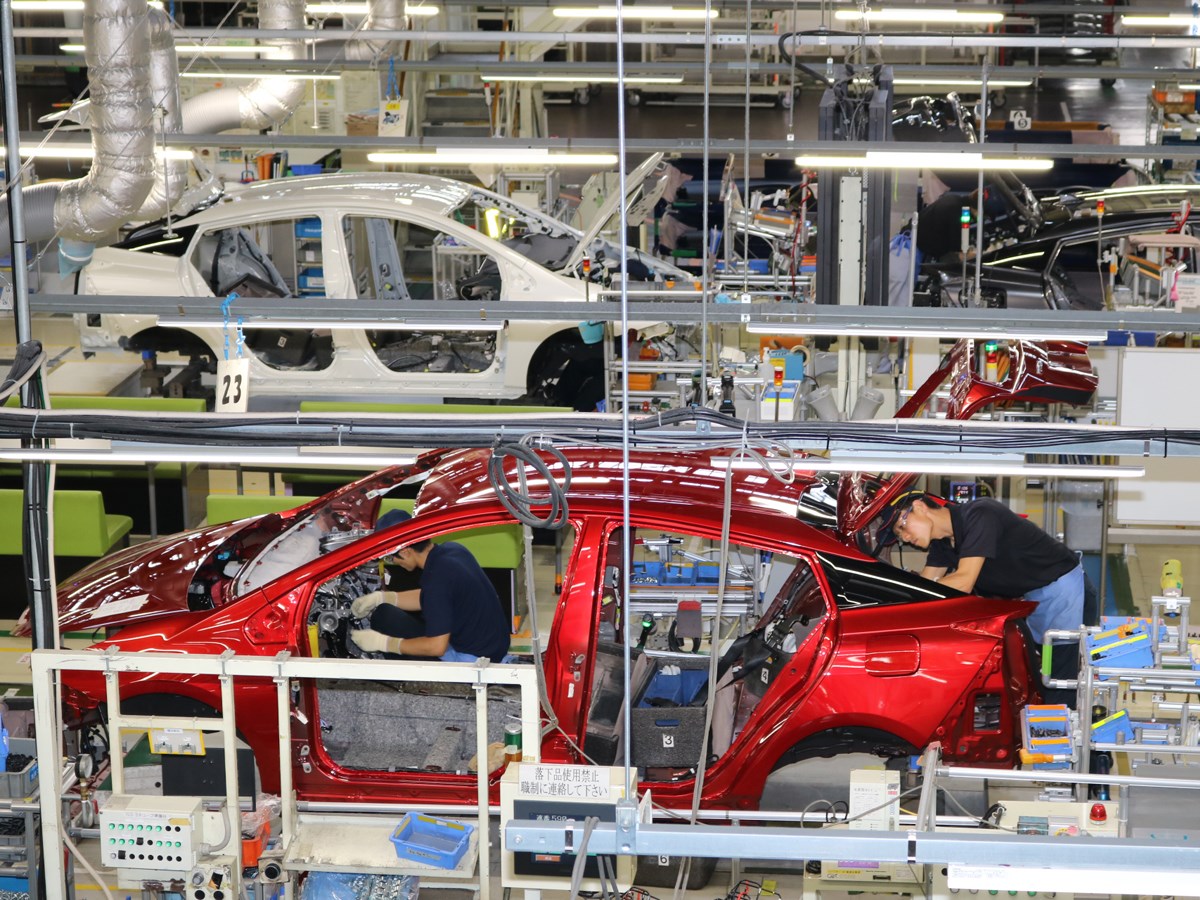 The Toyota Kaikan Museum introduces Toyota's varied approach to the design and production of vehicles. The museum is divided into various pavilions, The Eco and Emotion section concentrates on Toyota's eco-car technologies, Production and Creation focuses on Toyota's leading innovative production processes, while the Company and Society area is dedicated to Toyota's community activities. An area set aside for children explains the workings of an engine and mechanicals, car design, manufacturing and even road safety in an easy to understand and enjoyable manner. The popular vehicle showroom area features a wide range of Toyota and luxury brand Lexus vehicles, and the Toyota GAZOO Racing team is well represented with race cars and displays. The museum shop offers a selection of toys, models and Toyota items and is also popular among visitors. 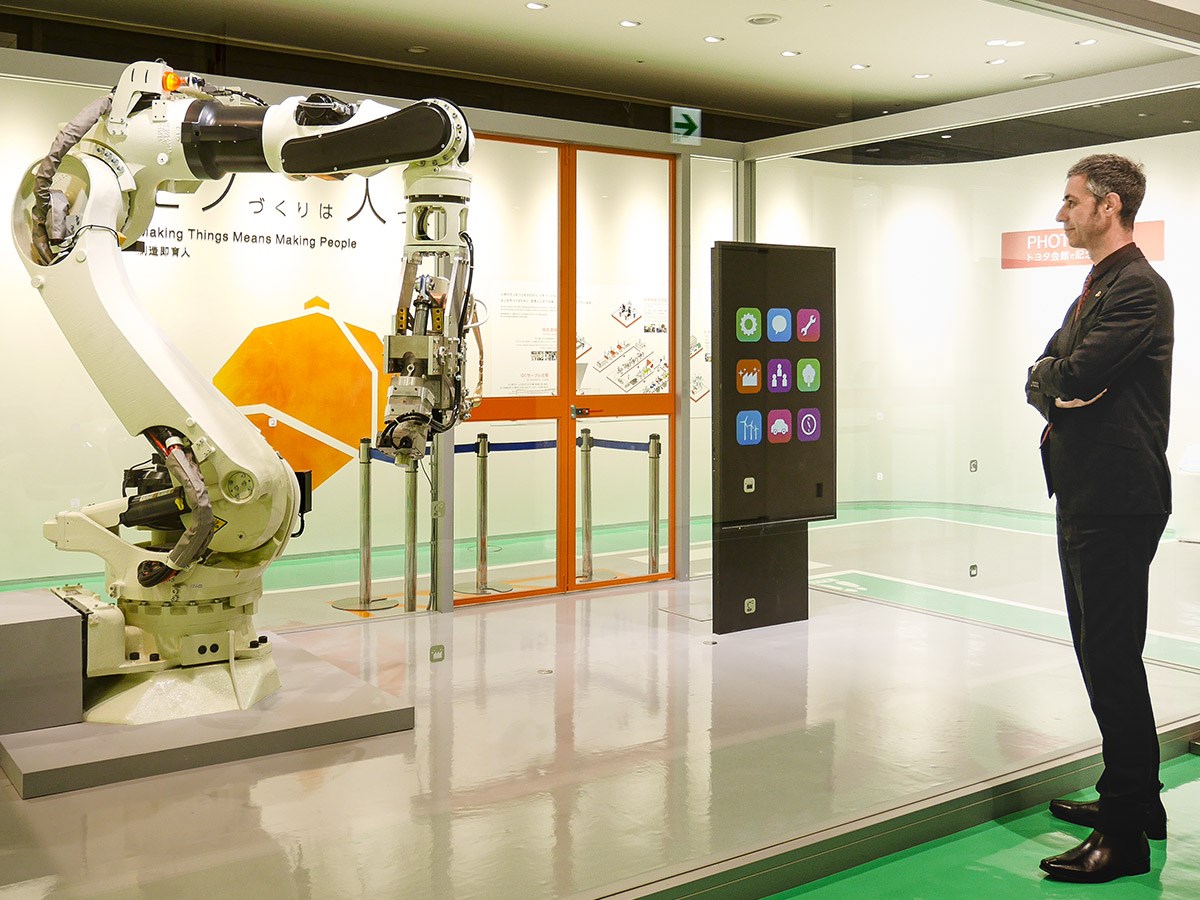 Production line tours showing the actual processes involved in the manufacturing of vehicles inside Toyota's well designed, clean and efficient production plants are other popular attractions. The stamping, welding, painting and assembly processes, along with explanations of the various policies instigated by Toyota to improve production and quality can be seen on these captivating tours. The plant tours require on-line bookings at least three months in advance, but are a fascinating view into the heart of Toyota's advanced processes and corporate ideals.

Toyota Motor Corporation is currently the world's 6th largest company by revenue, and the world's largest vehicle manufacturer. Because of Toyota, there is a little bit of Japan in every corner of the world, and you can see where it all began with one man's dream. 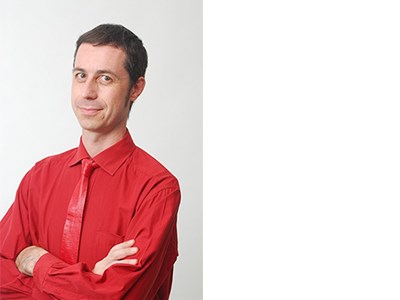 Chris Glenn is a bilingual radio DJ, TV presenter, producer, narrator, MC, copywriter, author and columnist, and Japanese historian, specializing in samurai castles, battles, armor and weapons. He is an inbound tourism advisor, and is often called upon as a lecturer and speaker on Japanese history and topics. He was born in Adelaide, South Australia in 1968, and has spent over half his life in Japan, most of that time in Nagoya, Aichi Prefecture. Chris is dedicated to promoting and preserving Japans’ long history, deep culture, traditions, arts and crafts.

Spots related to the Toyota Group: