Pottering is a "Wasei-Eigo" (Japanized English) word used nowadays in Japan to denote the activity of leisurely stroll around the town by bicycle. And Toyota-City has several famous spots perfect for some Pottering! We selected some interesting places that are otherwise prone to be overlooked if drove by. Check with us as we Potter about!

Inabu Area is the easy-peasy downhill course!
This time we chose a course around the Inabu Area. The main characteristic of this itinerary is that the hardest climbs are transposed by bus, so it's almost entirely downhill all the way. Perfect for Pottering Beginners, who will be able to complete the course without sacrificing too much of themselves. So, let's Toyota City Pottering! [Inabu - Asahi Edition] 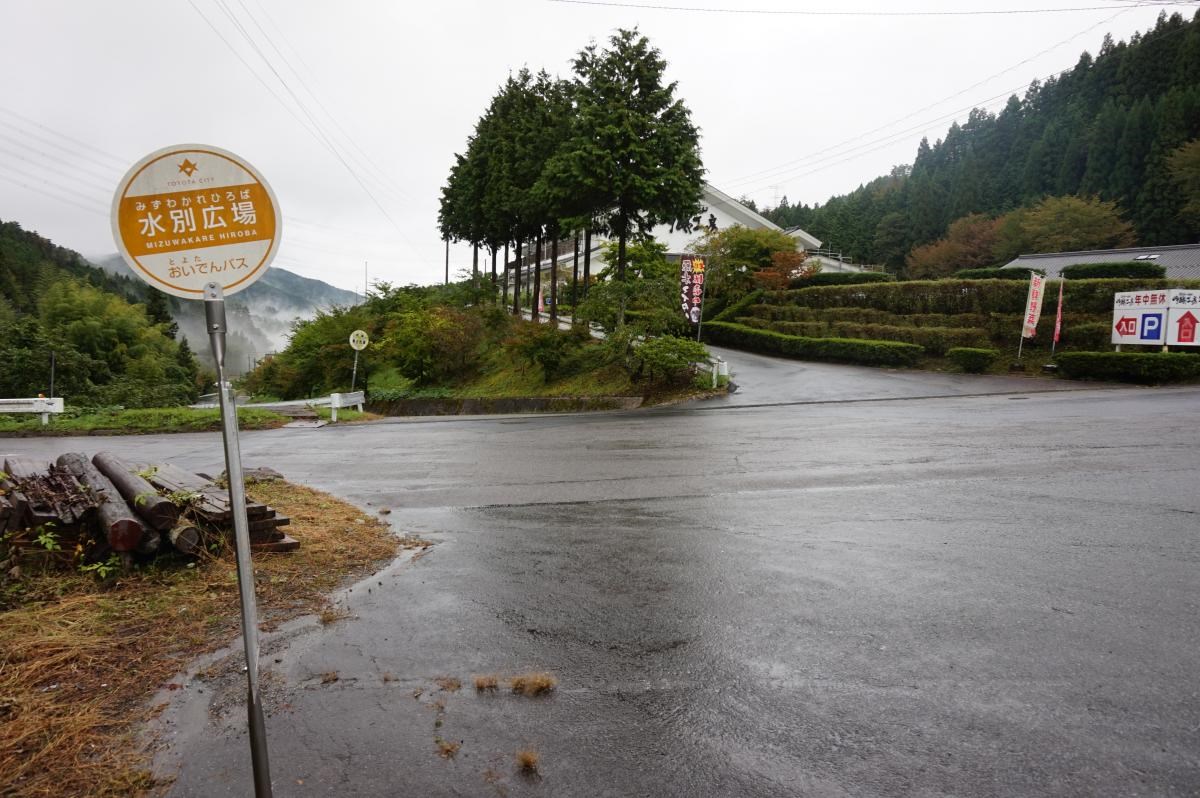 From Toyotashi Station, we took the Oiden Bus "Kaisoku Inabu" - a sort of fast service - and arrived at Mizuwakare. Here is the location of the Horaisen Ginjo Kobo (Sekiya Brewery Inabu Plant), that makes the famous local sake.

▲As long as the bicycles are inside the bike bags, it's possible to take them inside the bus. Just make sure no parts of it are exposed, and you'll be fine. 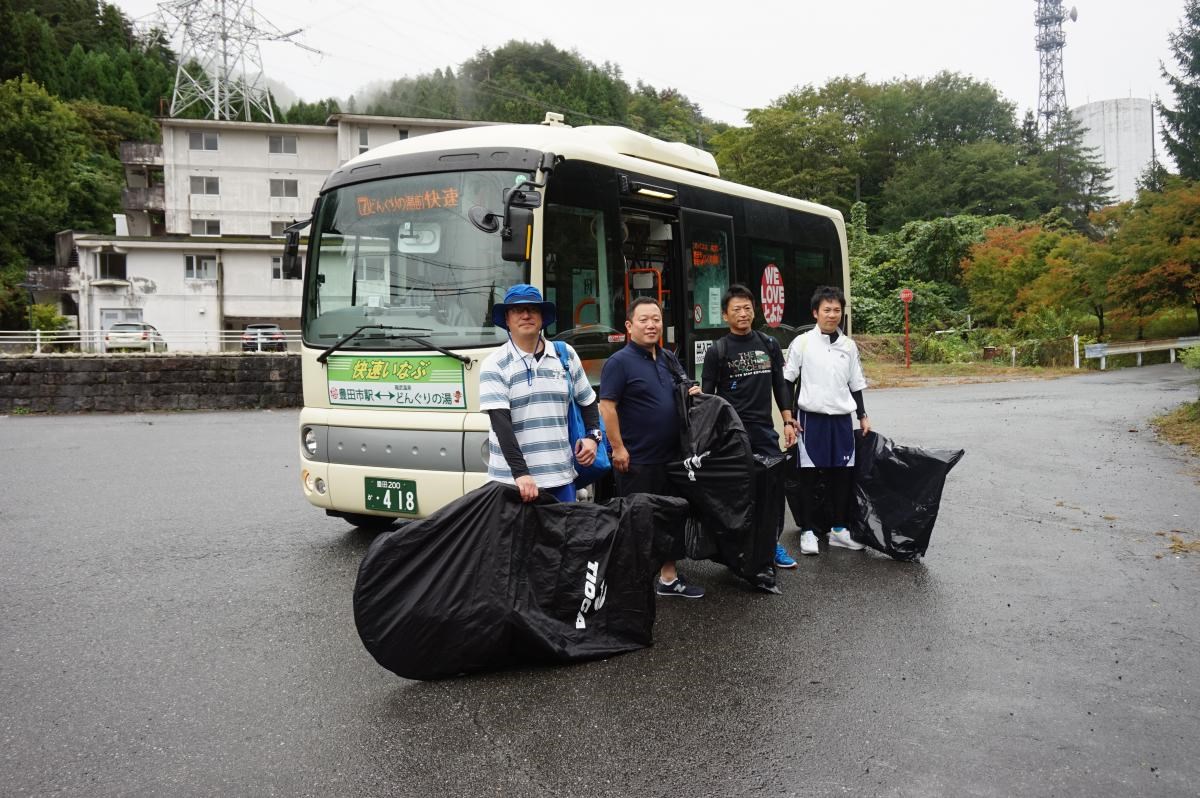 ▲Today's members, a mix of beginners and not-so-beginners, great company for a nice Pottering. 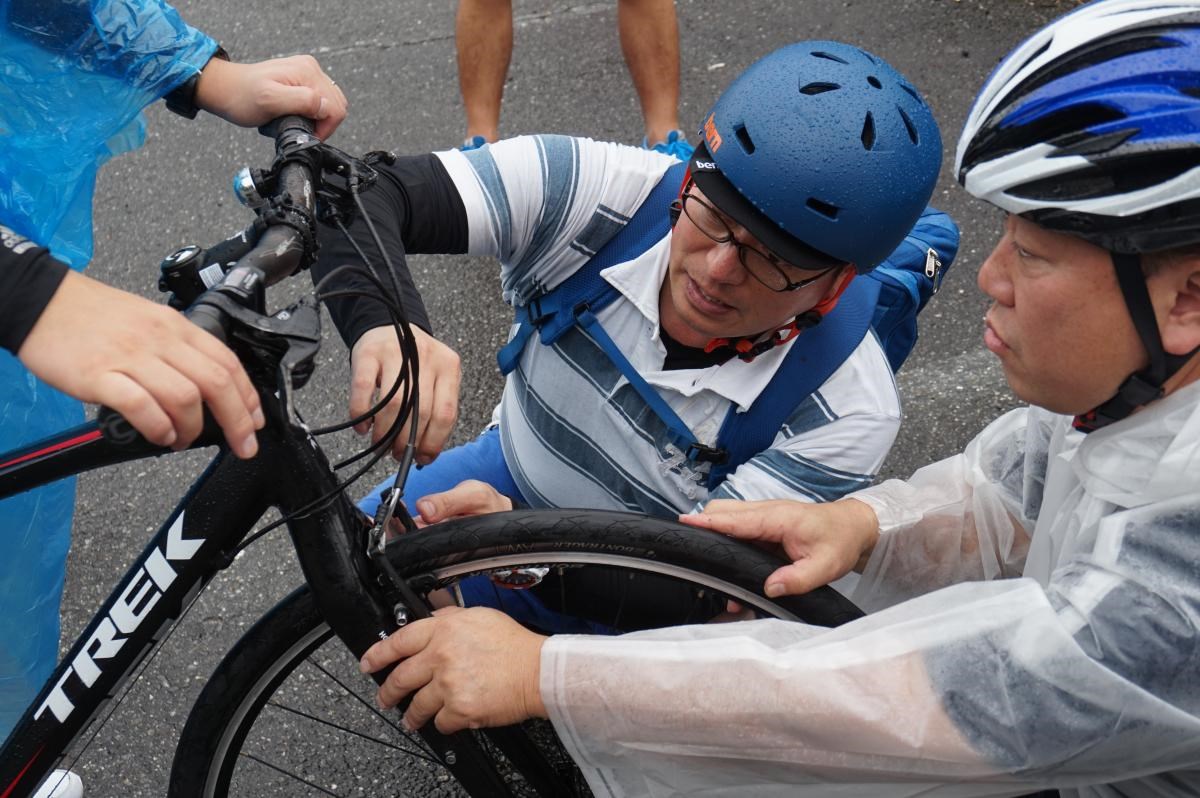 Important check-up before departing. Making sure to minimize the occurrence of unexpected happenings. 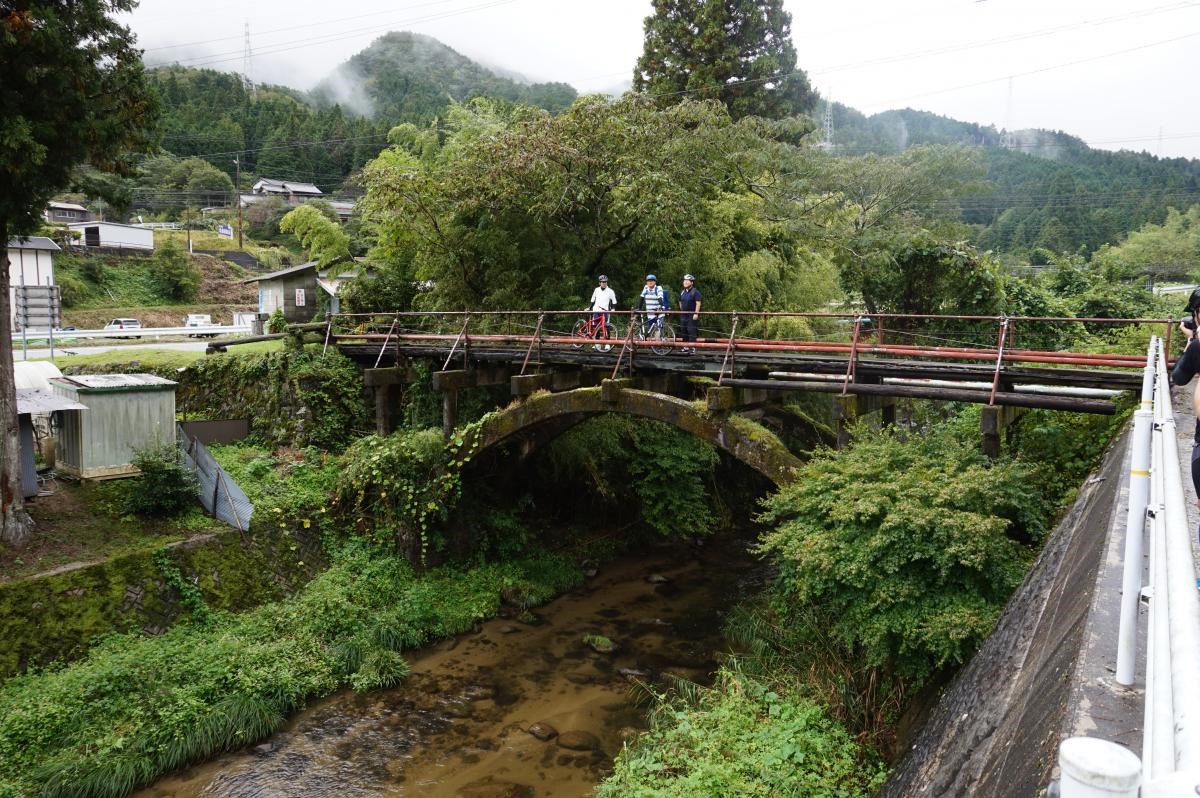 Stopover Spot 2
■Former Mayumi Bridge (Matsubuchi, Goshogaitsu-cho, Toyota-City)
Now unused, this reinforced concrete arch bridge is a remnant of the Taisho Era, being built in the 8th Taisho Year (1919). Is immediately after the entrance to the old road, so careful to not let it slip away unnoticed.

▲Leisurely pottering about while enjoying the old townscapes and vegetation along the road. 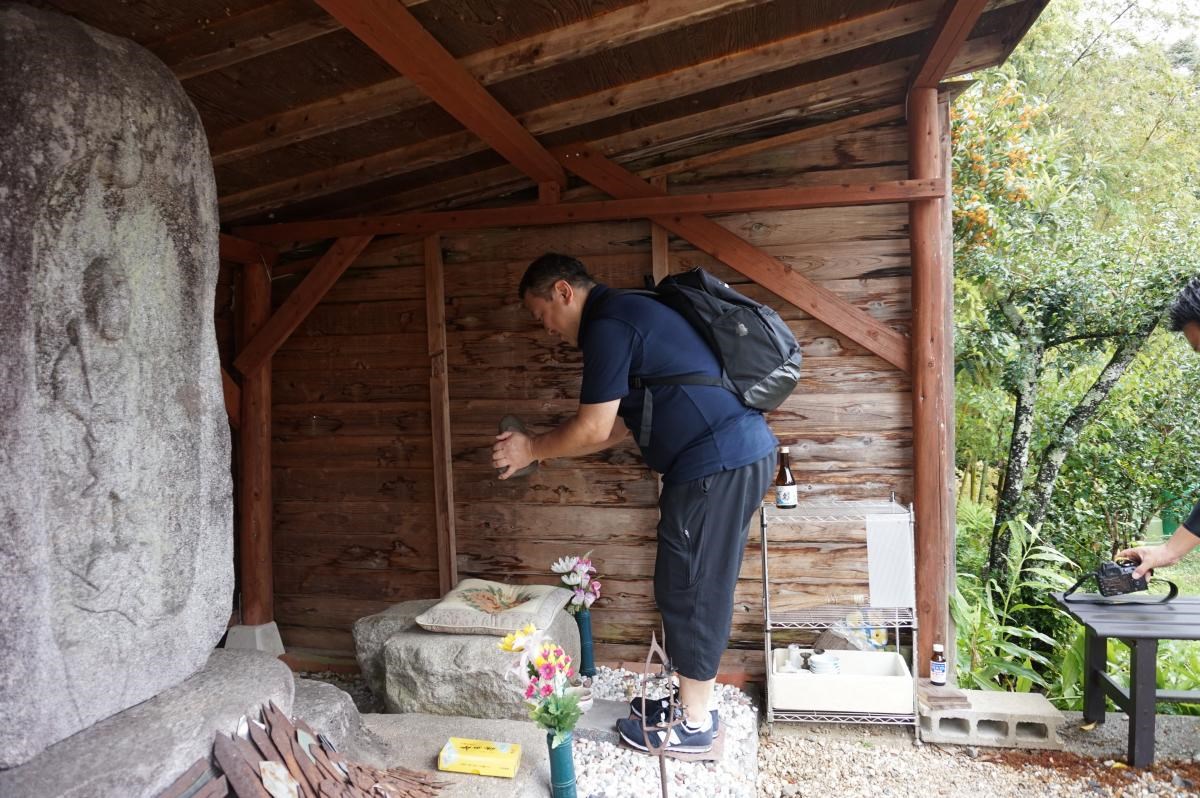 Stopover Spot 3
■Omokarusama Figure (161 Yashiki, Busetsumachi, Toyota-City)
A stone that shows if your wishes will come true.
Located in what is believed to be a spiritually powerful spot (local people will use the Japanese-made moniker "Power Spot") in the Shotengai Merchant's street of Inabu, behind the Japanese cuisine restaurant Tsutaya, the Omokarusama is a small statue carved in stone to which you ask a wish, and then take in your hands to lift it up. It is believed that, if you feel it is light, then it means the wish will likely come true. If otherwise you feel it to be heavy, then maybe it will not realize. To the left of Omokarusama is the Fudosama stone, to which people come when seeking help in looking for lost items. 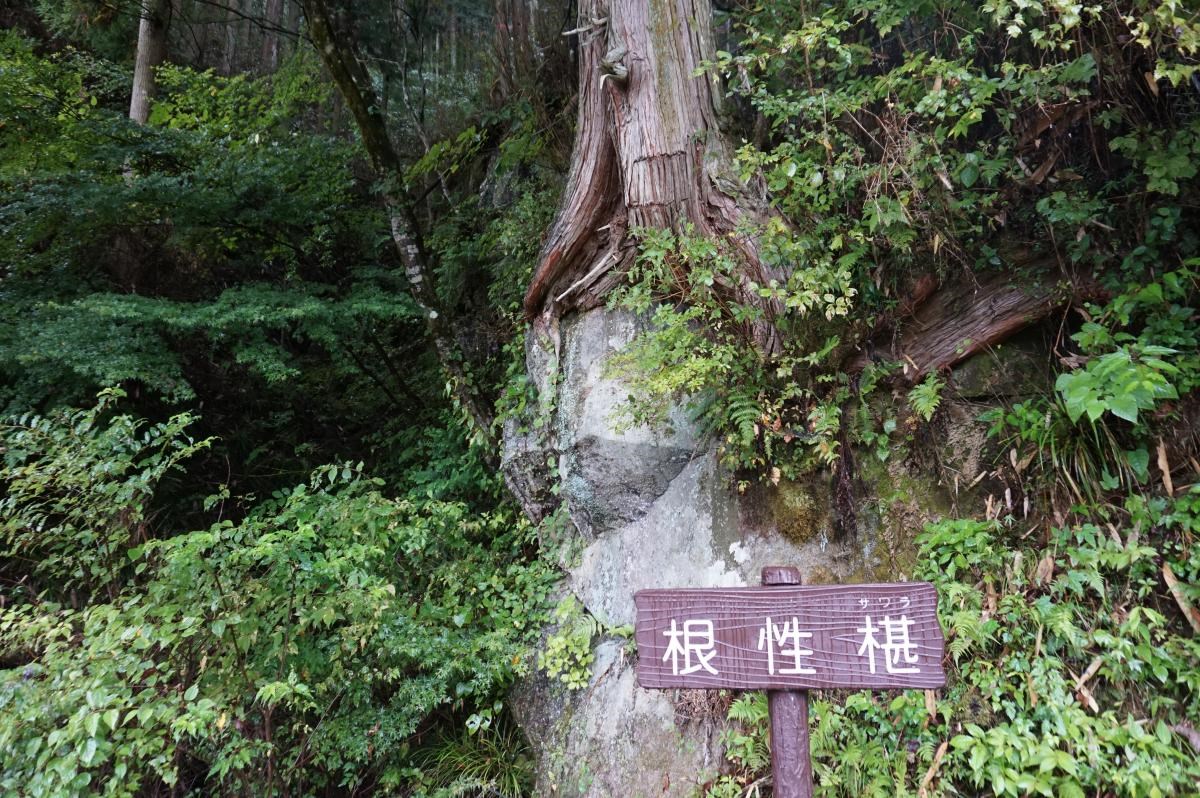 A sawara cypress grows high from a crack in the boulder. Amazement at the stalwart lifeforce of the local nature!

Stopover Spot 4
■Oidaira Park (5-1 Oidaira, Inabu-cho, Toyota-City)
Enjoying the foliage and the nature from the suspension bridge is superb!
The Kaze-no-Tsuribashi Bridge extends for 86 meters across the Naguragawa River. Widely known as a beautiful spot for autumn leaves.

Stopover Spot 5
■Hito-to-Ki Café (8-1 Tahira, Inabu-cho, Toyota-City)
A café where you'll meet a simple and beautiful life style.
This shop is a mix of café and furniture shop, and introduces a "slow, countryside" way of life. It has furniture and household items such as cutlery and others, which are made exclusively with materials of Japanese or Toyota-City origins. The workshop has lots of ideas for the home, and the café, delicious lunches.
TEL 0565-83-1008
Open hours 11:00 AM - 5:00 PM (4:00 PM on weekdays)
Closed on Mondays, Tuesdays and Wednesdays (closes also on other non-scheduled days and some winter recess days, please call in advance to check) 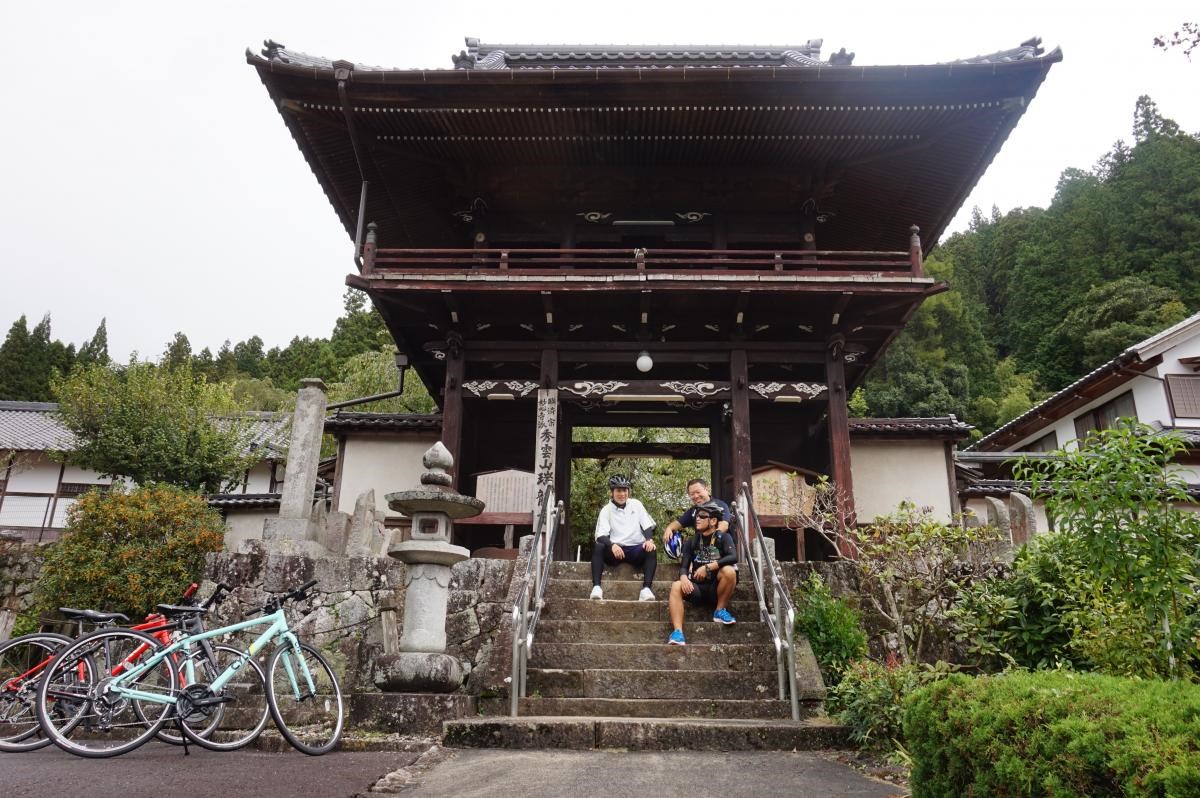 Stopover Spot 6
■Zuiryuji Temple (3 Terayama, Inabu-cho, Toyota-City)
A famous spot for weeping sakura cherry blossoms
Zuiryuji Temple is famous for its weeping cherry tree, highly popular during the sakura blooming season and estimated to be over 370 years old. The Sanmon Main Gate, named Shoro-mon (associating the kanji for bell, cherry blossom, and gate), is an impressive piece of architecture. We stopped for a break at the gate front stairs, with a nice mountain breeze on our faces.

Stopover Spot 7
■Inabashi Hachiman Shrine (1 Miyanohira, Inabu-cho, Toyota-City)
A symbol of matrimonial happiness, the "Merged Trees"
Both estimated to be about 700 years old, the giant "sugi" cedar embracing the "hinoki" cypress at the base make them both appear to be one a single tree. The perimeter of the combined trunk at ground level is about 8 meters. This impressively huge work of nature is prayed upon by the locals for marriage happiness. 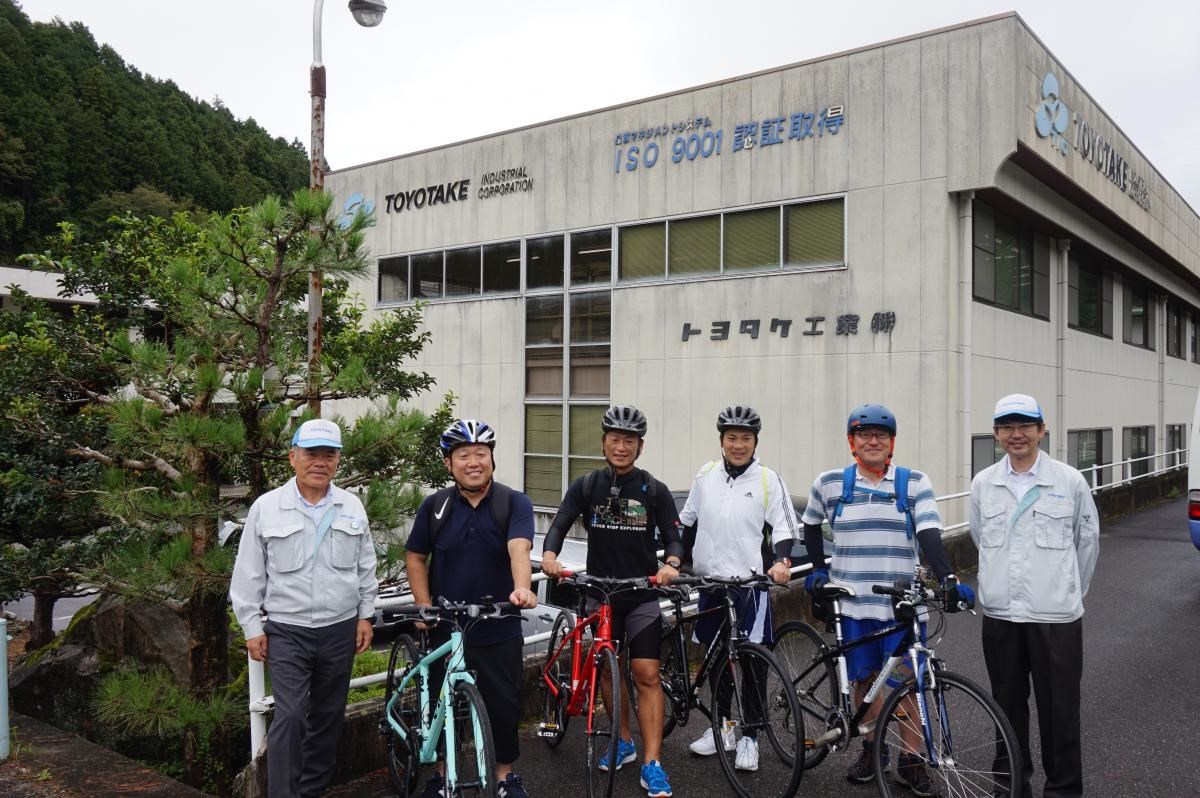 ▲Not exactly a sightseeing spot, but during our travel we came upon the factory plant of Toyotake, that cuts and sews the linings of car seats. This company has a mountain bike department, brought up to help vitalize the local economy. According to the president, Mr. Yokota, "Inabu is great in the morning! Running through the clear air while being bathed by the dawn's sunlight is a precious experience". The boasting about Inabu and small talk about bicycles lasted for quite a while! 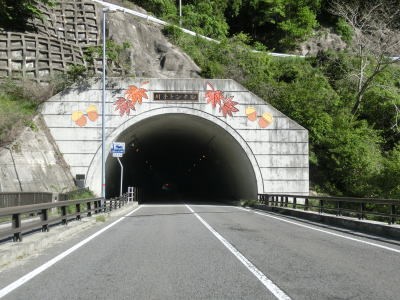 Stopover Spot 8
■Kawate Tunnel
The tunnel that hums a children's song
On the National Route 257 Bypass road there's the 407 meter long Kawate Tunnel. The hand side of the road heading to Ena is a Musical Road, that when drove by at speeds near or at 50km/h, play the country-wide famous tune "Donguri Koro-Koro" for about 20 seconds, emanating from the tires as they pass along grooves carefully carved in the tarmac. Unfortunately, that only works for cars, so on our bikes we couldn't hear a thing.

Stopover Spot 9
■Yahagi Dam (67 Higashibata, Shizurase-cho, Toyota-City)
The dam with a beautiful giant arch
A huge dam located deep amidst the mountains, towering 100 meters in height and stretching 323 meters in length. We took a break and rested while enjoying the sumptuous curvature of this mammoth of concrete. Seems like people can tour the inside of the dam if reservations are made in advance.

▲Lunch break in Odo-cho. The restaurant owner asked to not have the establishment revealed, but Goheimochi rice cakes on a stick for 100 yen and Yakisoba noodles at 350 yen, both grilled and prepared on the spot upon ordering, are a bargain that's worth looking for!

▲We stumbled upon a poultry farm along the way and did a tour. Fresh eggs, anyone?
■Ikeno Hennery (Farm-In Ki-to-Ki Kokko) (218 Nakanishi, Kuremata-cho, Toyota-City)
At Kokko, besides lodging, guest are also able to experience making pizza, harvest eggs at the hennery and other activities.
TEL 0565-65-2326 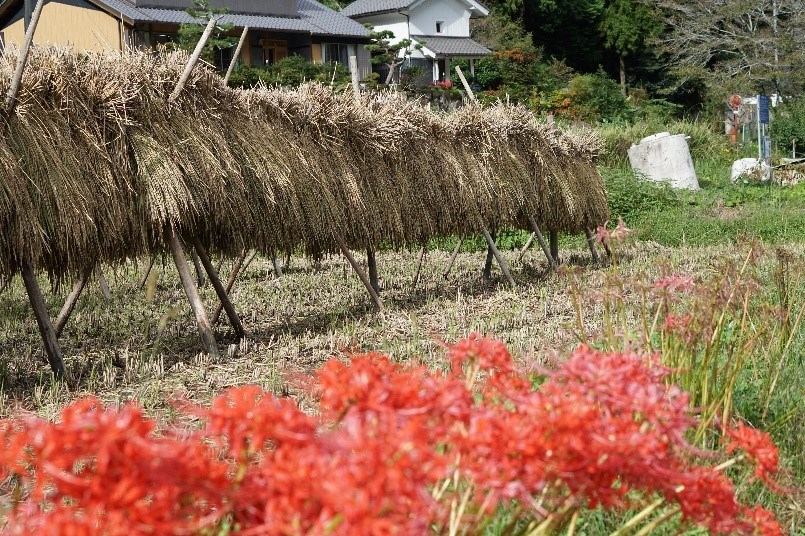 Spider lilies and racks for rice drying. The gorgeous countryside sights of Toyota-City go along the way. 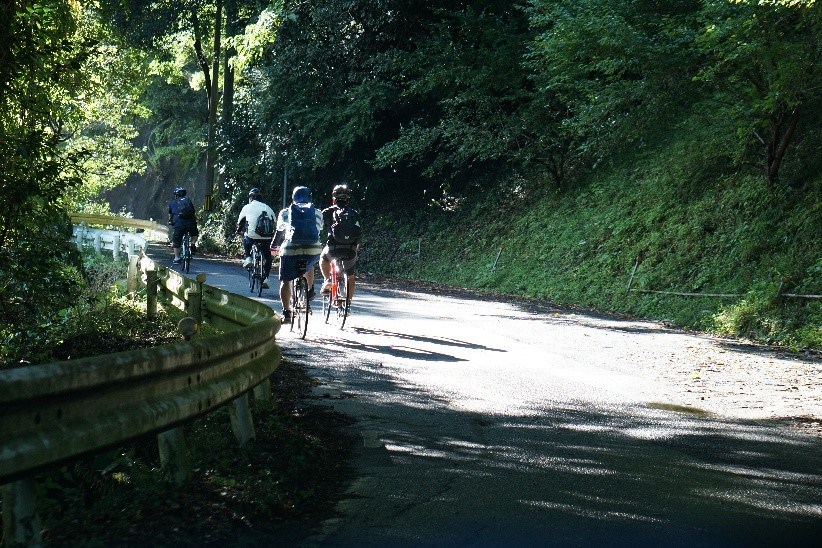 Stopover Spot 10
■Jurakuso (Toyota City Senior Onsen Relaxation Facility) (722 Higashida, Hirabata-cho, Toyota-City)
Reinvigorating radon hot springs
The radon-enriched waters are the main attractive. Besides good for a smooth skin, helped in alleviating some of the weariness gained in the first half of the trip. We kept it short to not over-relax our muscles.
TEL 0565-65-3611 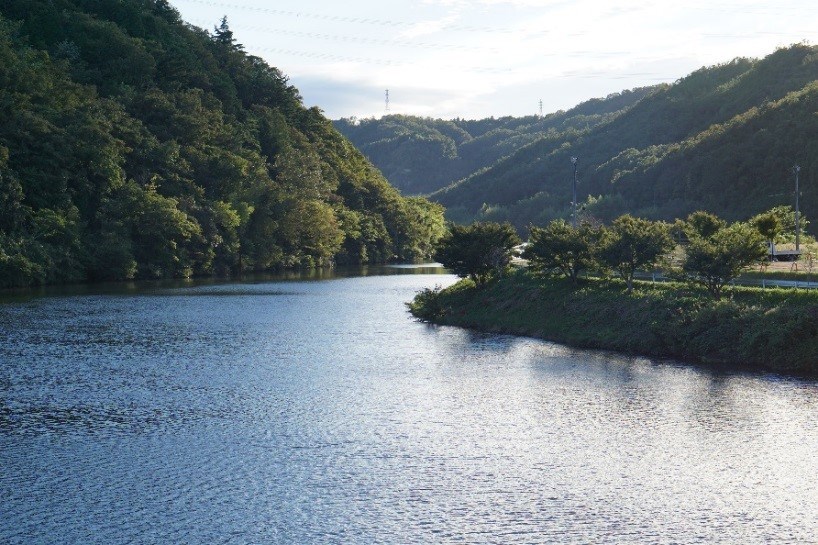 The dam's lake provides for gorgeous sights of the water surface. 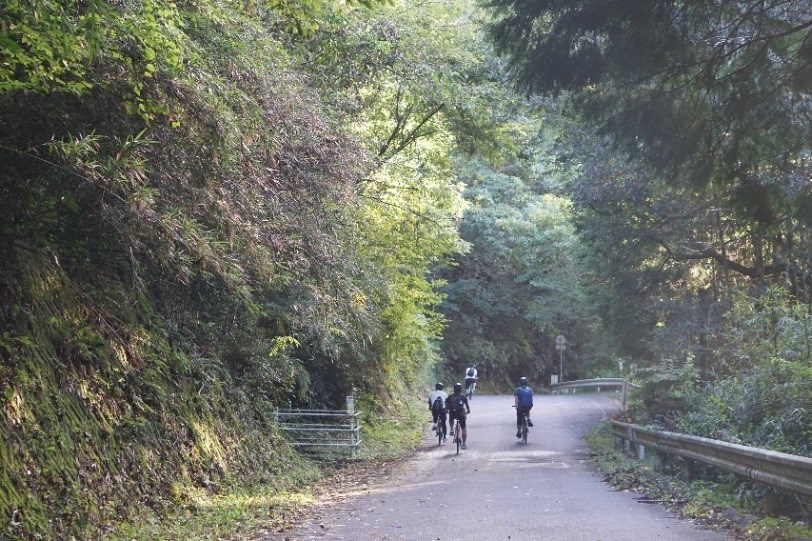 The sun was going low, indicating our journey was coming to its end. 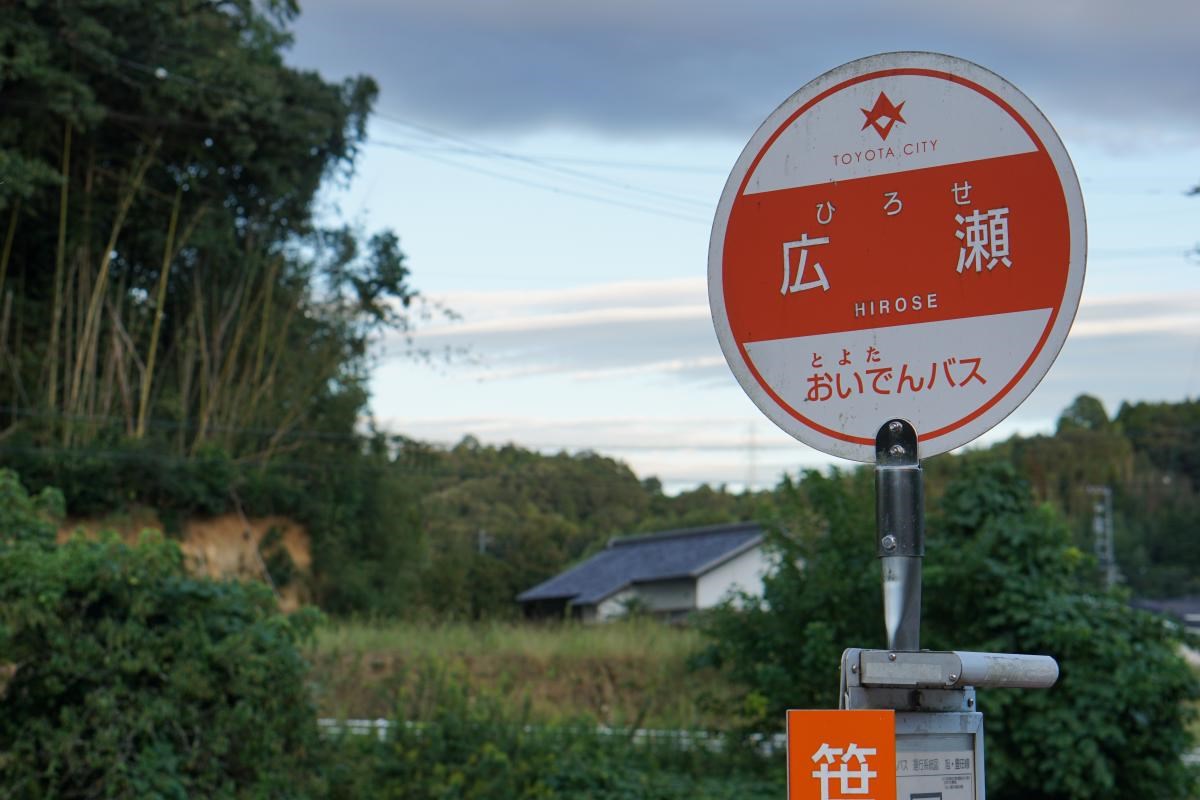 Our leisurely Pottering trip ends here. If you're too tired, from here it's possible to take the Oiden Bus back to Toyotashi Station. Just 10km left to go! 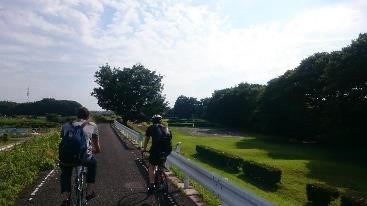 The way up until about 1.5km before the Toyota Station goal is on the relatively level and enjoyable road along the river bed. 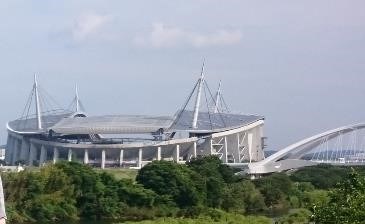 When you spot Toyota Stadium and Toyota Ohashi Bridge in the distance, you'll know the goal is just around the corner!