Asuke. It’s a part of Toyota City in Aichi Prefecture that everyone in Japan has heard of thanks to its natural beauty, however, it rarely appears in the tourist brochures, as it’s considered out of the way, and difficult to reach, but that is exactly what makes it so special! Asuke offers history, culture and stunning natural scenes that very few get to explore. 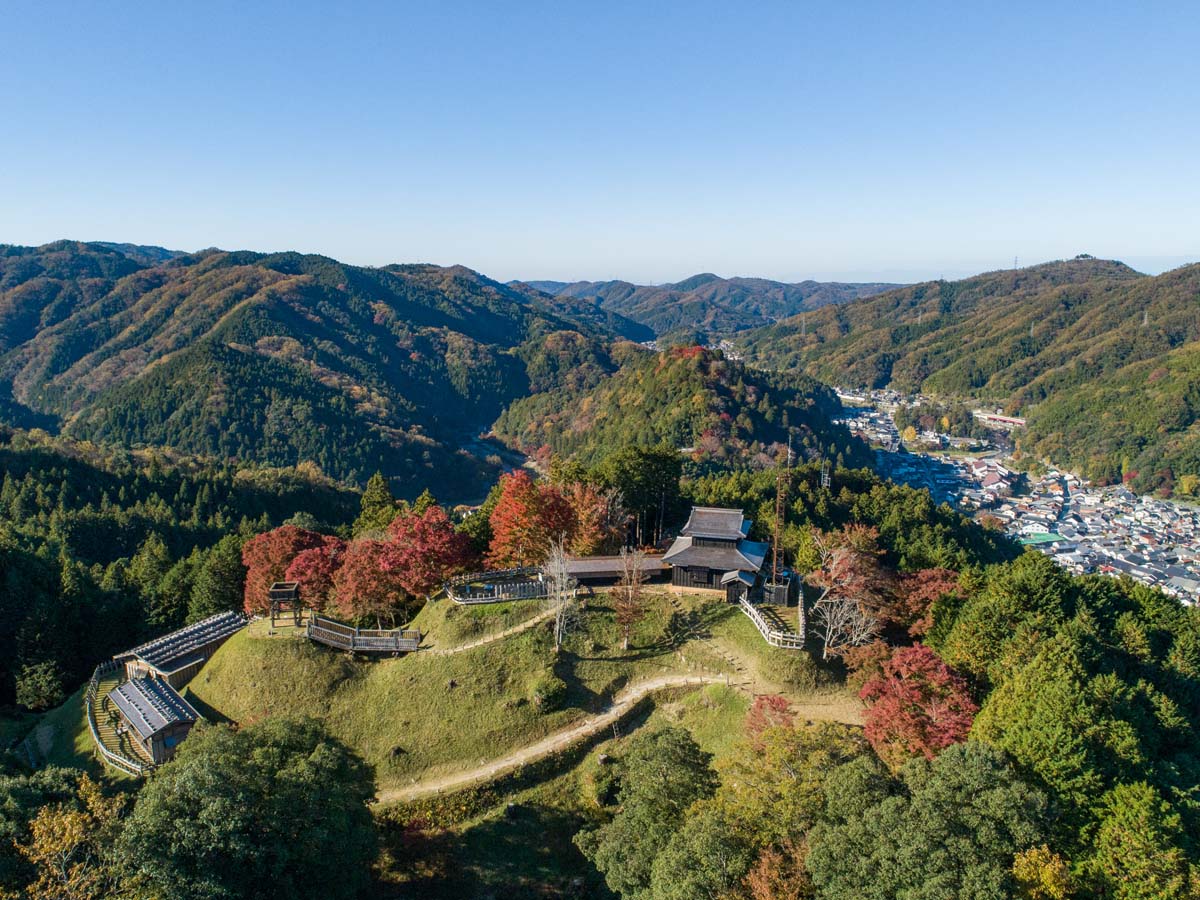 A trip to historical Japan isn’t complete without a visit to one of the many large samurai castles with soaring white keeps, surrounded by wide moats and imposing gates overlooked by threatening watchtowers. Most of these date from the early years of the Edo period, a 260-year span of peace that followed many centuries of turbulent warfare known as the Sengoku, or Warring States period.

Asuke Castle in Toyota’s Asuke region is a castle from that Sengoku period, when hundreds of smaller, rugged castles marked out and defended the various territories of the warlords. The majority were abandoned after 1600 when the local Tokugawa clan claimed victory in the decisive Battle of Sekigahara, and became the Shogun. Demolished and left to the elements, very few of these Sengoku period mountain castles have been reconstructed.

First built in the 15th century by the Suzuki Clan, Asuke was attacked in 1525 by Matsudaira Kiyoyasu, the future shogun, Tokugawa Ieyasu’s grandfather, who also absorbed the Suzuki samurai into his ranks. Around two decades later the Suzuki clan suddenly abandoned this alliance and joined the rival Imagawa clan. Two years after this, in 1564 Tokugawa Ieyasu with an army of 3,000 attacked Asuke, winning it back, and regained the Suzuki clan as vassals once again.

The castle was next attacked and taken by the “Tiger of Kai”, the great Takeda Shingen with 25,000 samurai in 1571. Four years later, Matsudaira Nobuyasu, Ieyasu’s eldest son, attacked and defeated the Takeda forces at Asuke, once again returning the fortress to the Tokugawa clan.

Having been attacked time and again, you can understand that Asuke Castle was a strategically important castle, watching over the important Chumakaido highway and the post town below. Salt, a very expensive and necessary commodity in those days, was carried on horseback between Owari Mikawa (eastern Aichi) and Shinano (Nagano Prefecture) along this route. 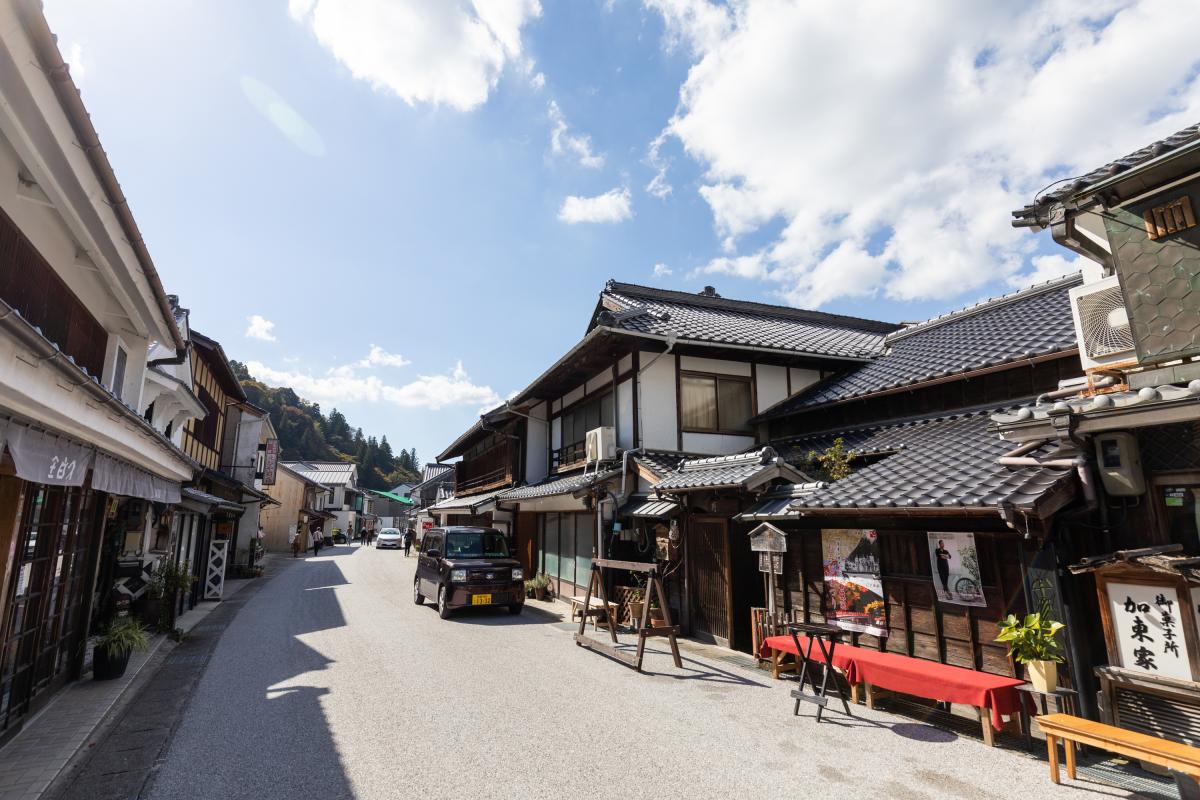 In the valley below the resilient castle is the highway post town of Asuke. During the Sengoku, or Warring States period, and long into the relative peace of the feudal Edo period, Asuke flourished as one of the many stations located along the previously mentioned important salt transport route. Even today, the area maintains its samurai era atmosphere. Remnants from the past, such as the long narrow streets, curving to follow the route of the old river, and further demonstrating its important defensive role as a castle town. Many of the traditional houses of Asuke still feature black boarded walls and white plastered warehouses, keeping that old spirit alive.

During the late February, early March period, the township has become famous for its hundreds of displays of Hina Matsuri traditional Dolls Day Festival dolls. Many are antiques and pre-loved dolls, given a new lease of life through the popular displays. Walk the streets of Asuke to see the displays in the windows of the shops and even the homes, and enjoy a tradition that is fast disappearing from modern-day Japan, but remains a part of the culture of Asuke.

On a hot August night, don your best yukata, summer kimono, and wander the streets of the old Asuke castle town to enjoy Tankororin, cylindrical lanterns made of woven bamboo and traditional washi paper lighting up the night. The event is enhanced with performances of shamisen, the traditional three stringed banjo-like instrument, rakugo story-telling, festival music and so much more. It’s all part of the Asuke Natsu Matsuri, summer festival held in the first half of the month. 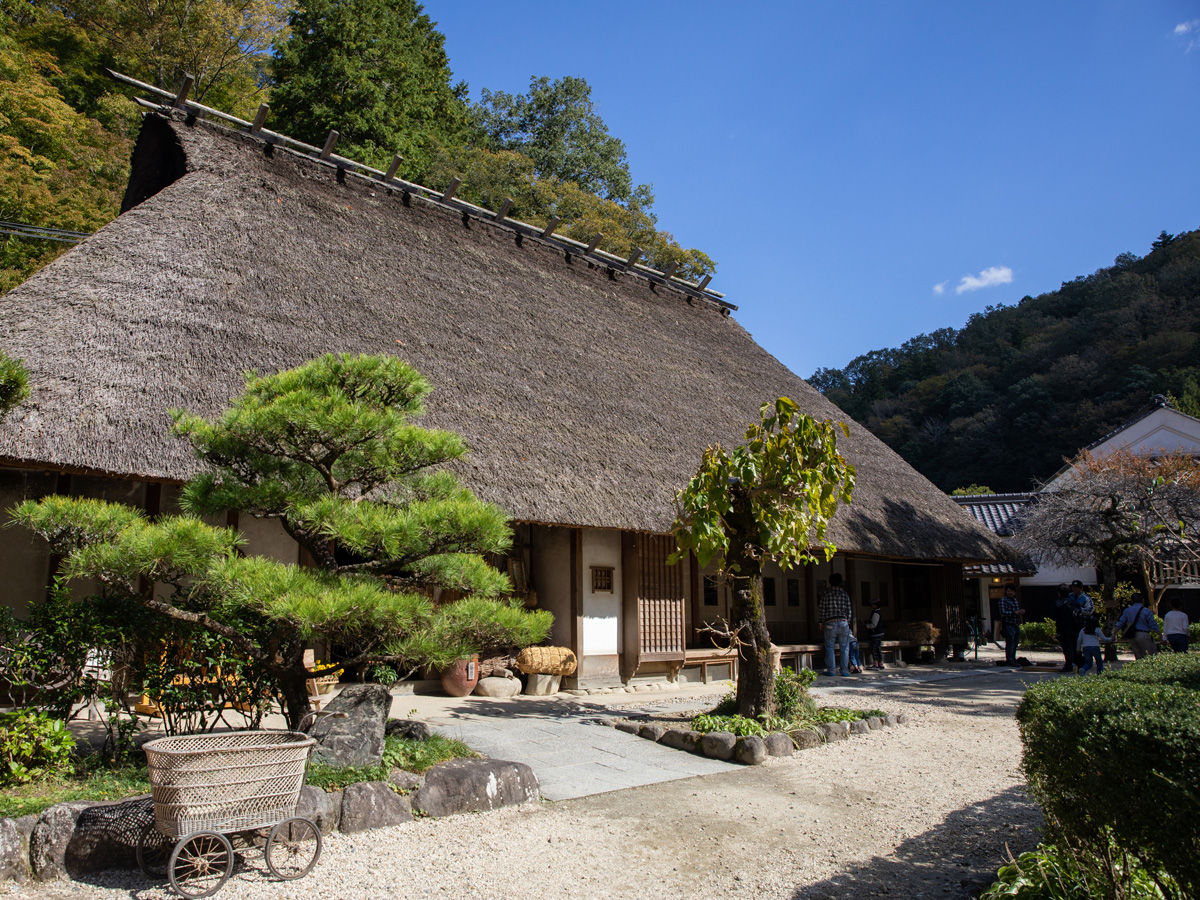 Sanshu Asuke Yashiki is an open-air living museum recreating the atmosphere of the old Asuke village during the samurai era. A number of historical Edo period homes and structures have been preserved in this village-like setting where traditional handcrafts such as blacksmithing, indigo dying, cloth weaving, paper making, bamboo basket weaving, waraji straw sandal making, and a range of others continue to be practiced. Many of these traditional handcrafts are available for sale, making ideal gifts and souvenirs. Meeting the artisans first-hand and experiencing their skills will leave you with a greater appreciation of the value of these timeless handcrafts.

Visitors can enjoy various unique hands-on experiences, learning traditional crafts from the traditional artisans year-round. It’s an ideal chance to create your own memories and souvenirs. The village also has cafes offering local delicacies, including ayu sweetfish, freshly caught from the river and salt-grilled over an open-hearth, and the ever popular flat, oval-shaped toasted rice cakes called Gohei Mochi. Served on a stick and smothered in a rich blend of tasty soy and miso sauces, this is a traditional taste of old Japan. 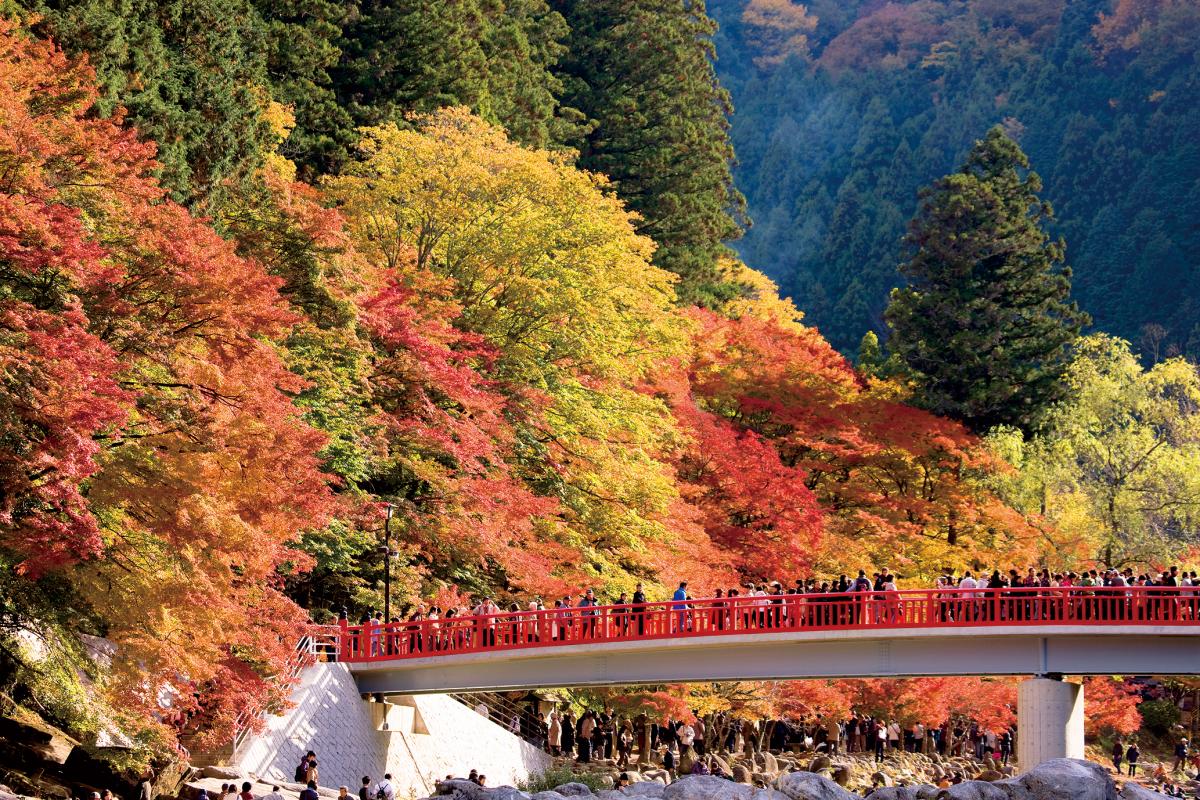 One of Japan’s top three Most Impressive Autumn Leaf Viewing Spots is located within the confines of nature-filled Toyota City! The stunning Korankei Gorge, featuring craggy cliffs towering over the clear, fresh waters of the highly reflective Tomoe River, is an ideal spot for photographers year-round, and for visitors looking to enjoy the very best of Japan’s exquisite nature.

Over eleven varieties of maple make up the forest of over 4,000 trees lining the deep, wide gorge, and providing one of the nation’s most spectacular natural seasonal color displays. During the autumn months the gorge is illuminated between sunset and 9pm for night-time viewing enjoyment too.

The entire gorge can best be seen from the vantage point of the Tomoebashi Bridge, located right beside the Korankei Bus Stop and near the Toyota City Asuke Branch office. From there, a picturesque tunnel of fine maple trees leads you deep into the heart of the Korankei Gorge, and to the symbolic picturesque red Taigetsukyo Bridge. Near to that is the famous Goshiki-Momiji, a particularly large tree which displays five different colored maple leaves all at the same time.

Many of these huge maple trees within the Korankei Gorge are believed to have been planted around 1634 by the 11th abbot of the ancient Zen temple, the famed Kojaku-ji, founded in 1427, and nestled within the pristine precincts. The old monk encouraged visitors to add to the numbers of treasured trees over the years, and the result has been enjoyed for centuries. The rich, natural fall colors beneath crisp, clear blue skies and the darkened rock cliffs reflected in the gently flowing river below, make for a spectacular contrast, and you’ll soon realize why this area is among the nation’s top three spots.

During the winter months, the gorge becomes a popular walking spot. In spring, wild flowers bloom and the first signs of life bring visitors to the gorge. By mid-year, the scorching summer of central Japan’s Aichi Prefecture reaches its peak, and so the cool waters and relaxing lush greenery provides a welcome respite from the heat and humidity.

Asuke, It’s an Experience, Not a Side Trip!

Asuke is one of those rare areas almost everyone in Japan has heard of, but has yet to really discover. Without a doubt, the rich history and culture, and the stunning natural scenes of Toyota City’s Asuke region must be on your Go To list. Make the trip, it will make your Japan experience.